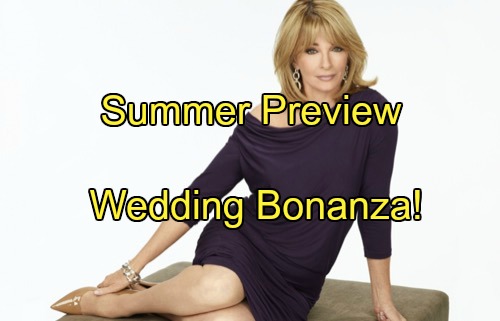 “Days of Our Lives” (DOOL) spoilers reveal that love is in the air! In an interview on Hallmark’s “Home and Family,” Deidre Hall (Marlena) teased a summer preview and that we’d be seeing an increase in romance over the next few months. “We have got three love stories coming up this summer, mine among them,” Hall said.

After some playful banter, Hall admitted that there are actually several weddings in the works.

That lines up with the buzz we’ve been hearing lately. “Days of Our Lives” definitely has some epic ceremonies in store. In fact, we may even have a double wedding on our hands. Word has it that Theresa (Jen Lilley) and Brady (Eric Martsolf) may tie the knot shortly before or after John (Drake Hogestyn) and Marlena say “I do.”

We don’t have confirmation on the double nuptials, but it would make sense for “Days” to make this move. First of all, they could get more bang for their buck in terms of the budget. Plus, this isn’t John and Marlena’s first rodeo. They might as well just have a piggyback ceremony since they’ve headed down the aisle plenty of times over their years.

We should also point out that DOOL’s stunt coordinator was apparently on hand for at least one of the upcoming weddings. Uh-oh. That could spell trouble. “Days of Our Lives” was on the hunt for an Anne (Meredith Scott Lynn) stunt double a while back. Since we haven’t seen that stunt double on screen yet, perhaps that means Anne could get caught in the wedding mayhem.

Of course, Anne tends to be the comic relief whenever she pops up. Maybe that means we’re talking about something along the lines of a funny mishap rather than a total disaster. Regardless, there are sure to be some huge surprises. (For the record, Meredith Scott Lynn still appears to be taping episodes here and there. We shouldn’t be too worried about Anne.)

Hall talked about three love stories, so there might be an additional wedding to look forward to this summer. Who might the third blissful couple be? It would be nice to see Steve (Stephen Nichols) and Kayla (Mary Beth Evans) fully reunite.

They’re obviously headed in that direction and “Stayla” fans are hoping they’ll make it official again.

It’s worth mentioning that another wedding may be taking place this fall. Thanks to a leaked video that was later taken down, we saw Adrienne (Judi Evans) on set wearing a wedding gown. Will Adrienne and Lucas (Bryan Dattilo) get hitched? If so, we shouldn’t rule out a classic “stop the wedding” moment.

Justin (Wally Kurth) needs to wise up and realize that he’s letting his true love slip away. It sounds like DOOL is finally revving up the romance in Salem. Stick with the NBC soap for updates on all of these sweet storylines and more!

So “Days” fans, what do you think about the news that so many weddings are on the way? Are you glad they’re going to include some uplifting material? Do you enjoy soapy nuptials?