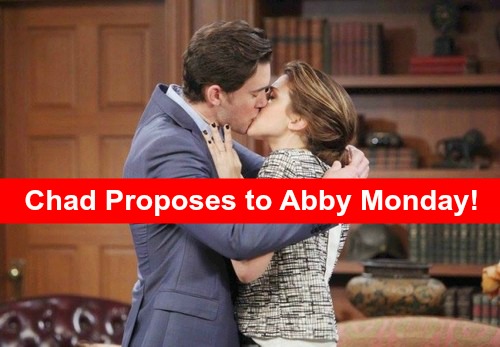 “Days of Our Lives” spoilers reveal that Chad (Billy Flynn) will decide he wants Abigail (Kate Mansi) to remain a part of his life forever. Now that he’s free from Andre’s (Thaao Penghlis) control, Chad plans on spending the rest of his days with Abigail. With that in mind, Chad will ask Abigail to be his wife as CDL previously reported, accurately as always!

Abby will be stunned by Chad’s sudden proposal, but she’ll happily accept.

Abigail will be thrilled by the idea of marrying Chad and finally getting her “happily ever after.” Unfortunately, we all know that’s not how it works on a soap. Abigail and Chad will have to prepare for the next wave of drama and it’s coming up quickly. DOOL spoilers say Andre will learn that he’s been duped. It looks like Andre will find out right after the proposal.

Chad had hoped to continue the ruse, but that’s obviously not going to happen. “Days” fans know that the DiMeras value loyalty above all else. When Andre realizes his brother is no longer the perfect DiMera soldier, he’ll be furious. The question is: will Andre confront Chad about his deception or will he decide to keep the knowledge to himself? “Days of Our Lives” spoilers say Andre may try to turn the tables once again if Chad isn’t careful.

Now the stakes are even higher for Chad. Abigail and Thomas will be Chad’s top priority moving forward. Chad will need to keep a close eye on Andre if he hopes to keep his family safe. Abigail has a very valuable piece of property in Ireland and the DiMeras might choose to resume their pursuit of it.

Of course, the news that Thomas is Chad’s son will undoubtedly come into play later. You can bet that the DiMeras will want to recruit Thomas as the next DiMera pawn as soon as he’s old enough to toddle. Will Chad protect Abigail and Thomas from the danger ahead? DOOL viewers will be anxious to see what unfolds. Stick with “Days of Our Lives” for updates on what Andre might have up his sleeve.

So “Days” fans, what do you think about Chad’s upcoming proposal? Will Chad be able to take on the DiMeras or will Andre manage to shift things back in his favor? Voice your opinion in the comments below and don’t forget to check CDL often for the latest “Days of Our Lives” spoilers, updates and news.