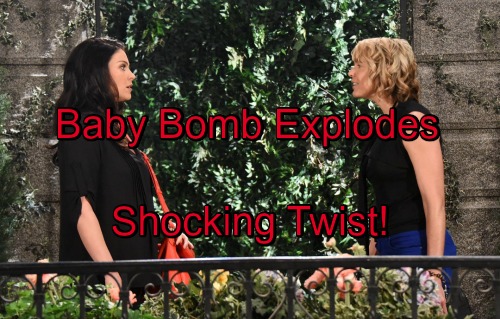 Days of Our Lives (DOOL) spoilers for the week of August 29 – September 2 tease that a baby bomb is about to blow up in Salem. Chloe (Nadia Bjorlin) and Philip (John-Paul Lavoisier) will have to decide how they’re going to spread their fake news. Unfortunately, their paternity plan will fail right off the bat.

DOOL viewers will recall the Deimos (Vincent Irizarry) posed as a businessman named Robert when gathered info from Chloe. He was hoping to learn more about the Kiriakis clan for his revenge mission. Philip’s name came up and Chloe said they were high school sweethearts. However, she said nothing about being involved with him recently.

Of course, Deimos also remembers his couch romp with Chloe quite well. Philip and Chloe might try to fudge the timing slightly to throw Deimos off, but he won’t buy it. Deimos will hire Dario (Jordi Vilasuso) to get to the bottom of this mystery. Dario has a sneaky side, so he’ll be the perfect spy.

Days of Our Lives spoilers say Nicole (Arianne Zucker) will get updates on Deimos’ hunch. Deimos will admit that he feels certain Chloe is pregnant with his child. Nicole will be surprised and somewhat skeptical. She’ll want to hear the truth straight from Chloe.

Days spoilers indicate that Nicole will track Chloe down and demand to know if this is Deimos’ baby or not. Chloe will reluctantly confess that it is. She’ll promptly beg Nicole to stay tight-lipped. Chloe will suggest that it would be better for everyone if Philip claimed this kid.

Nicole will mull it over and eventually agree to keep the secret. Deimos won’t be happy when he inevitably discovers the deception, but his love for Nicole can overcome that. It’s tough to believe a lie would get Nicole dumped.

Meanwhile, Philip will turn to his mother for help. Days of Our Lives fans realize that Kate (Lauren Koslow) and Philip have a unique relationship. Kate’s never really been the motherly type, but she obviously cares about Philip.

Philip has two requests coming up. One is about financial assistance, presumably for his record label. The other is a request for Kate’s cover-up skills. Philip will tell Kate the truth about Chloe’s pregnancy and ask her to help them sell the lie. They’ll do everything they can to make Deimos accept their story.

Deimos might be convinced that he’s wrong after Chloe, Philip and Kate carry out their scheme. Still, the fact that Kate is in the loop will inevitably lead to trouble. Philip should probably know better than to trust his mother.

DOOL spoilers state that this plot will come with some shocking twists. We can’t take anything at face value. Ken Corday, the executive producer of Days, has dropped some intriguing hints in various interviews. Corday insists that we should expect the unexpected.

This storyline is sure to be a big one for the NBC soap. We’ll keep you posted on any upcoming details. Stay tuned and don’t forget to check CDL often for the latest Days of Our Lives spoilers, updates and news.