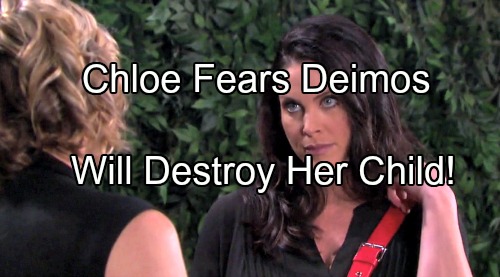 Days of Our Lives (DOOL) spoilers tease that Chloe (Nadia Bjorlin) will have a terrible dream about the fate of her baby. It’s clear that Chloe is growing increasingly concerned about the threat Deimos (Vincent Irizarry) poses. Chloe knows that Deimos has done some ruthless things and she’s worried about any additional danger he might cause.

Deimos used Chloe to gain information about the Kiriakis family. She had no idea the details she casually mentioned would be part of a cruel revenge plot. Later, Deimos convinced Chloe to take him in while he recovered from his river ride. He offered to begin a new life with Chloe and they ended up sleeping together.

DOOL fans knew that Deimos would never settle for Chloe. He’s in love with Nicole (Arianne Zucker) and no one else will do. Chloe feels like Deimos just uses women and tosses them aside. She regrets making love to someone so manipulative. Deimos claims he’s trying to change, but Chloe isn’t sure she buys it. Honesty obviously isn’t Deimos’ strong suit.

Days of Our Lives spoilers reveal that Chloe will wake up from her latest nightmare in a panic. She’ll freak out about her child’s future. Chloe will fear that she won’t be able to protect her baby from the darkness Deimos could bring.

In reality, Chloe might be overreacting a little. It appears Deimos has a soft spot for kids. Days viewers saw how great Deimos was with Parker (Christian Ganieire). He also seemed appalled when he heard the news of Tate’s kidnapping. Deimos suggested that anyone who would take a child away from his or her mother is sickening.

It’s possible that Deimos was just putting on an act, but it’s equally possible that he truly considers kids off limits. Still, what happens when this child grows up and dares to go against Deimos’ wishes? Maybe some of Chloe’s apprehension is indeed warranted.

Regardless, Chloe will be a bundle of nerves the next time Philip (John-Paul Lavoisier) sees her. Days of Our Lives spoilers say Philip will offer to marry Chloe and pretend this baby is his. Chloe will agree to think about it, but Philip will start to get impatient.

After a few days, Philip will insist that he needs an answer. He’ll want to know if Chloe is in or out. Chloe will probably decide that Philip is a better option than Deimos. She has a history with Philip and he’s stepping up to show he cares.

It’s nice to see Philip doing something thoughtful and responsible. Days fans know that Philip tends to be somewhat selfish, but he could be trying to break that pattern. It looks like Philip is finally attempting to put the needs of others first.

Of course, we all know Deimos is going to learn the truth eventually. He’ll likely want to be a father to his child. Deimos doesn’t have any other children and he’s not getting any younger. This is Daddy Deimos’ big chance.

Some tense moments lie ahead on the NBC soap. We’ll give you updates as more details emerge. Stay tuned to DOOL and don’t forget to check CDL often for the latest Days of Our Lives spoilers, updates and news.