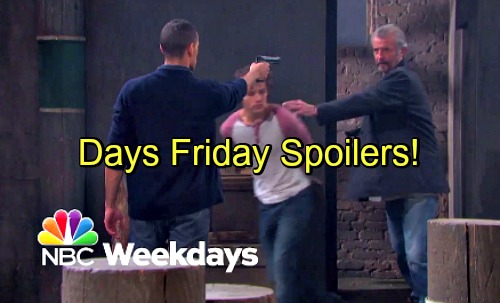 Days of Our Lives (DOOL) spoilers for Friday, October 7, tease that nerves will kick in for several Salemites. Some risky encounters are about to go down. First, we’ll see John (Drake Hogestyn) prepare for the ransom exchange. He feels like he should be the one to meet with Orpheus (George DelHoyo). John thinks he can handle whatever Orpheus throws his way.

Steve (Stephen Nichols), Roman (Josh Taylor), Paul (Christopher Sean) and JJ (Casey Moss) will help John get ready for this tense meeting. They’ll hope that John can keep this peaceful, but they’ll also realize that Orpheus is incredibly dangerous. John will have to stay on guard as he carries out this mission.

John is all set to wire the $20 million that the fugitives’ requested. Unfortunately, he’ll run into some trouble when he demands to see Joey (James Lastovic) first. John will want to be sure Joey is alive before he transfers that much money. Orpheus and his pals shouldn’t get a dime if they can’t keep their end of the bargain.

Days of Our Lives spoilers indicate that things will get heated and these enemies will draw their guns. The good news is that John will survive this confrontation. The bad news is that Orpheus and his crew will continue their reign of terror. Next week, DOOL spoilers say John will make a bold move to stop the madness.

In the meantime, Ciara (Vivian Jovanni) will beg Theo (Kyler Pettis) to reconsider his plans. Days fans know that Theo wants revenge on Clyde (James Read). Despite Ciara’s desperate plea, Theo will insist that he has to do this for Abe (James Reynolds). He won’t let Clyde get away with shooting his father. 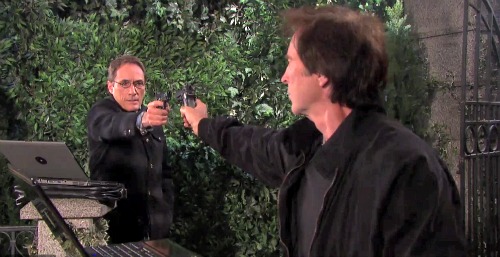 Later, Theo will finally come face to face with Clyde. He’ll pull out his gun as he seeks justice. Clyde has already been feeling guilty about pumping a bullet in Abe’s chest. He’s trying to be a better dad and he hates that he caused pain for someone else’s son.

Days of Our Lives spoilers say Clyde will shove Joey aside as he moves closer to Theo’s weapon. It looks like Clyde might tell Theo to take his best shot. However, the fact that Joey is in this scene seems significant. He could be the one who stops Theo from doing something he’ll regret.

Days viewers will remember that Joey snapped and killed Ava (Tamara Braun) for targeting his parents. His guilt over that fateful night has been eating him alive. Joey won’t want Theo to go through life with a similar burden. It could tear him apart.

Whatever the case, both Clyde and Theo will live to tell this tale. Elsewhere, Nicole (Arianne Zucker) will gather with Marlena (Deidre Hall) and Victor (John Aniston). They’ll mull over Xander’s (Paul Telfer) grudges in hopes of preparing for any sneak attack. Nicole realizes that Xander could pop up anytime and anyplace.

Xander and Nicole will have a shocking showdown in the near future. For now, Nicole will have to struggle with a waiting game. We’ll give you updates as more info comes in. Stay tuned to DOOL and don’t forget to check CDL often for the latest Days of Our Lives spoilers, updates and news.

This friendship stands the test of time. #DAYS https://t.co/W5nsRHCaOl pic.twitter.com/SQDlhvWe47

Watch your back. His revenge is 30 years in the making. #DAYS pic.twitter.com/CNpbPD8fBV