‘Days of Our Lives’ Spoilers: Daniel Cosgrove Out at DOOL – Aiden Brutally Murdered 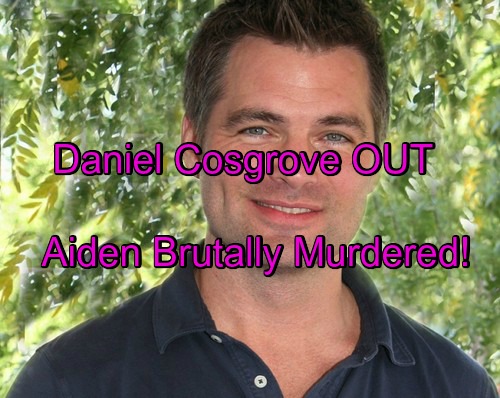 Days of Our Lives (DOOL) spoilers tease that the sand in Aiden’s (Daniel Cosgrove) hour glass could be running out in the near future. There are persistent rumblings about Daniel Cosgrove’s departure from the NBC soap. If Aiden’s exit is approaching, it certainly wouldn’t be a surprise. The nature of Aiden’s return put an expiration date on his time in Salem.

If Days of Our Lives intended on making Aiden a viable love interest for Hope (Kristian Alfonso), they wouldn’t have brought him back as such a scoundrel. They could’ve easily said the doppelganger switch happened much sooner. Aiden was working for the DiMeras during his relationship with Hope, but that deception was something they could get past.

However, the fact that Aiden plotted to kill Hope was the nail in the coffin for the “Haiden” pairing. Once Aiden returned from the “dead” and started spouting more lies, it became clear that he was simply an obstacle for Hope and Rafe (Galen Gering) to overcome. Aiden fibbed to win over Hope, but he’s about to turn against the woman he claimed to love.

On the bright side, Aiden works well as a shady character. The rest of his story arc should be intriguing. Aiden is about to go on a power trip in his new role as the district attorney. Days buzz suggests that Aiden will likely blackmail Hope. He’ll get proof that Hope killed Stefano (Joseph Mascolo) and he may use it to get what wants.

Unfortunately, Aiden is still involved with Andre (Thaao Penghlis) and that’s going to cause problems. Andre is determined to make Hope pay for murdering Stefano and he’ll do everything in his power to make sure it happens. Andre will destroy Aiden if he dares to get in the way.

Even if Aiden cooperates and fully embraces his dark side, Andre might view him as a threat. In other words, Aiden is going down and he’s going down hard! If Andre doesn’t take care of it, there are others who might.

Everyone at the Salem PD will be looking for any charges that will stick against Aiden, especially if Hope lands in prison because of him. Aiden could find himself behind bars, too. Then again, perhaps a far worse fate awaits. Aiden already returned once to cause drama for Hope. There’s no need to bring him back for this same plot over and over.

That may mean that DOOL has plans to kill Aiden off. It makes sense that they’d go for shock value since the character has run his course. If Aiden gets Hope locked up, Rafe might be willing to do the deed. He’d probably do anything for Hope. That includes seeking vengeance.

Andre would be a better option though. He may want rid of Aiden after his lackey has officially served his purpose. If something goes wrong in their scheme, that would just give Andre an even better reason to murder his partner in crime.

Bottom line, Aiden is in for a rude awakening. His current good luck streak will inevitably end in disaster. Aiden’s doppelganger was killed off last fall, but it’s doubtful a lookalike will take his place this time. Will Aiden truly be murdered? We’ll give you updates as more Days of Our Lives news becomes available.

So Days fans, what do you think about the possibility that Daniel Cosgrove is done at DOOL? Will Aiden finally pay the price for his crimes? Will Aiden end up in prison or is a brutal murder coming? Voice your opinion in the comments below and don’t forget to check CDL often for the latest Days of Our Lives spoilers, updates and news.