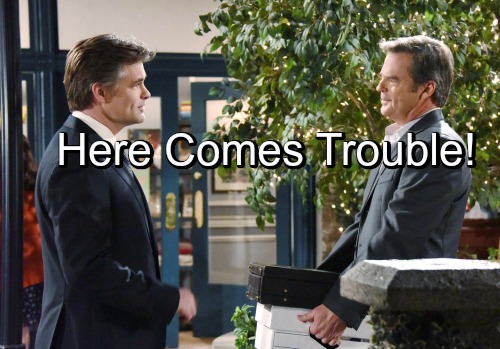 Days of Our Lives (DOOL) spoilers tease that Justin (Wally Kurth) will officially resign and Aiden (Daniel Cosgrove) will be appointed as the new district attorney. Abe (James Reynolds) won’t be thrilled about the change, but he knows he doesn’t have much of a choice. Aiden could create a media circus with the evidence he’s uncovered.

Abe will think it’s better to just stick to the plan and let Aiden take over. Of course, there will be extreme consequences to that decision. Once Aiden has a taste of power, it should go straight to his head. In fact, it’s gone there already. Somebody needs to wipe that smug look off Aiden’s face and Hope (Kristian Alfonso) will certainly try.

DOOL viewers know that Aiden has caused drama for Hope from the moment he met her. The DiMeras hired Aiden to make Hope forget all about Bo (Peter Reckell). Aiden did as he was told and Hope slowly fell for the new man in her life. She felt like she’d finally found love again.

Unfortunately, that feeling was short-lived. Aiden lied to Hope about his wife’s death and that made Hope wonder if he might be a murderer. Later, Aiden admitted that Chase (Jonathon McClendon) accidentally did the deed as a toddler.

Can we really believe that story now? Aiden lies as easily as he breathes. Days of Our Lives fans watched Aiden hide his debt from Hope throughout their relationship. He eventually changed the life insurance policy and plotted Hope’s murder. Aiden ultimately chickened out, but so what? He’s still despicable for even thinking about it.

To top it all off, Aiden fibbed after he returned from the “dead.” He suggested that he was swapped just after they got engaged. With a little help from Shawn (Brandon Beemer) and Rafe (Galen Gering), Hope realized Aiden’s claims were once again bogus. She actually married Aiden and he was planning on killing her until the very last second.

This fine, upstanding citizen is Salem’s new DA, ladies and gents. The only way this could be worse is if Andre (Thaao Penghlis) himself was the district attorney. In reality, he might as well be! Days viewers can assume that Andre’s partnership with Aiden will lead to trouble. It won’t be long until Andre makes calculated, ruthless move.

Nevertheless, Aiden will have a little time to gloat and lower his guard. Days of Our Lives spoilers say Hope will poke the bear. She’ll rip into Aiden for stealing Justin’s job, but this verbal attack is obviously a bad idea.

Hope killed Stefano (Joseph Mascolo) and there’s a good chance she’ll pay the price for that soon enough. However, Aiden will also get what’s coming to him. Whether Rafe strikes back or Andre double-crosses him, Aiden’s day of reckoning will arrive.

Days is setting Aiden up for a huge fall by placing him in this DA slot. DOOL buzz hints that Aiden is headed out at the NBC soap. What could Aiden’s exit involve? Will Rafe or Andre make sure he lands in prison? Could Aiden die instead? Danger is undoubtedly brewing.

There are plenty of Salemites who would like to see Aiden six feet under – for real this time! We’ll give you updates as more news emerges on this possibility. Stay tuned and don’t forget to check CDL often for the latest Days of Our Lives spoilers, updates and news.