Days of Our Lives (DOOL) Spoilers: Daniel’s Death Sends Nicole on the Warpath – Eric The Target of Grieving Widow 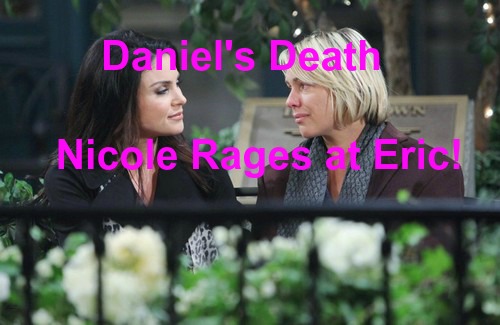 “Days of Our Lives” (DOOL) spoilers reveal that Maggie (Suzanne Rogers) will soon have to make a choice that’s incredibly painful. The New Year’s Eve car crash will have everyone in a state of shock. When Maggie learns there’s no hope for Daniel (Shawn Christian), she’ll have to determine whether Eric (Greg Vaughan) or Brady (Eric Martsolf) will get her son’s heart.

Maggie will believe she holds two lives in her hands and she’ll be hesitant to deliver the decision that could lead to another loss. We don’t know for sure what Maggie will decide, but DOOL buzz suggests that she may choose Brady. Regardless, “Days” fans can relax knowing that both Brady and Eric will survive.

Once we get these two patched up, we’ll see the tragic repercussions of what’s occurred. “Days of Our Lives” spoilers indicate that Nicole (Arianne Zucker) will be on the warpath. First, Jennifer (Melissa Reeves) will get an earful for her role in the collision. It appears Jen was swerving to avoid Eric, so she’s not really to blame.

Nevertheless, Nicole will be looking for anyone she can lash out at. Perhaps venting a little will help Nicole mourn. Of course, the most explosive scenes are coming once Nicole realizes that Eric is responsible for the crash. DOOL spoilers say Nicole will be stunned when she gets updates on Eric’s involvement. Naturally, Nicole will fly into a rage.

Eric will undoubtedly be apologetic for his actions, but that probably won’t be enough to tame Nicole’s anger. She’s currently feeling a plethora of intense emotions. Nicole needs time to process everything that’s happened. After Nicole works through the stages of grief, she can focus on healing and possibly forgiving.

Meanwhile, Eric will have to tackle a different form of grief. Daniel was Eric’s friend and he would’ve hated to lose him anyway. The fact that Eric inadvertently killed Daniel just makes all of this even worse.

Eric was already dealing with a lot of guilt about his last exchange with Serena (Melissa Archer) before her death. Now Eric will face a burden that’s downright unbearable. Stick with “Days of Our Lives” to see how Eric will handle his shame.

So “Days” fans, what do you think about the news that Maggie will have to choose who gets Daniel’s heart? What about Nicole’s wrath? Will her anger weaken over time? Is redemption possible for Eric? Voice your opinion in the comments below and don’t forget to check CDL often for the latest “Days of Our Lives” spoilers, updates and news.