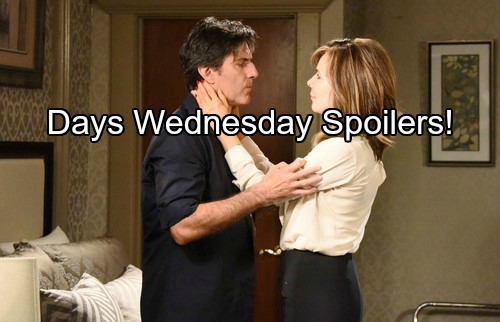 Chloe passed the news along to Philip (John-Paul Lavoisier), too. Now it’s time for everyone else to hear about this villain’s comeback.

Days spoilers reveal that Roman (Josh Taylor) will be caught off guard by Deimos’ sudden reappearance. He’ll want some answers about where Deimos has been and what really happened before his ride down the river.

Deimos will be willing to respond to any questions Roman might have. He’ll hope to set this sorted out so he can move on (preferably with Nicole).

DOOL viewers know that Kate dug a deep hole for herself while Deimos was gone. She had Aiden (Daniel Cosgrove) falsify the marriage documents and she tried to pin Deimos’ “murder” on Nicole. In reality, Kate simply shoved Deimos in a jealous rage. He hit his head on a tree and fell into the river on his own.

Days of Our Lives spoilers say Deimos will insist that Kate was mistaken about Nicole’s actions. Once Deimos explains that this was just an accident, Nicole will be off the hook. Surprisingly, it looks like Deimos may help Kate out of her jam as well.

Deimos told Nicole that he wanted to change for the better. Maybe Deimos is trying to keep that promise.

Of course, that doesn’t mean Kate will let this go. She’s still dealing with some strong anger and she’s capable of anything with Andre (Thaao Penghlis) on her side. You’d think Kate would be grateful enough to leave Deimos alone, but that may not be the case.

Deimos will surely return the favor if Kate seeks any type of vengeance.

While Kate and Deimos clarify the situation, Philip will try to figure out his next business move. Days of Our Lives spoilers suggest that Philip will ponder the idea of giving Chloe a record deal. He could use some good talent for his label and Chloe might be the perfect fit.

It doesn’t hurt that old feelings are starting to resurface. That could play a role in Philip’s decision to propose a contract. Philip is the kind of guy who never truly gets over his former flames. We’ve certainly seen that play out with Belle (Martha Madison).

However, Belle has chosen Shawn (Brandon Beemer). Philip needs to close the door on that relationship and try his luck with a Chloe instead.

If Philip makes Chloe an enticing offer, it will definitely bring these two closer. Speaking of offers, Days fans will remember that Eduardo (A Martinez) gave Dario (Jordi Vilasuso) an intriguing one. Eduardo recently purchased Club TBD and he wants Dario to help him run it.

Dario doesn’t approve of his father, but he could use a job. Plus, he’s had plenty of experience managing the beach bar in California. We’ve already seen Dario hanging out at Salem’s beverage hotspot with Blanca (Ximena Duque). It’s clear that he likes the place.

Dario will eventually decide to suck it up and take the deal. Let’s hope working together will help Dario and Eduardo get to know each other a little better. We’ll give you updates on any other Hernandez family developments.