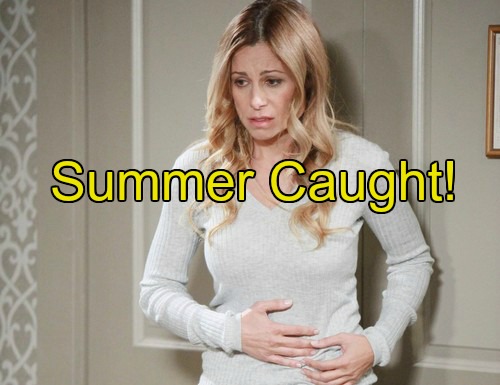 Days of Our Lives (DOOL) spoilers tease that Theresa (Jen Lilley) and Brady (Eric Martsolf) will rely on the help of their family and friends as they work to find Tate. After someone drugged Theresa’s protein drink, she dozed off in the park. The next thing she knew, Tate was gone.

Theresa was hysterical as her worst fear became a reality. She even had to be hospitalized after collapsing in Brady’s arms. However, Theresa later drifted off to dreamland again and it gave her a big clue about what happened to her son. This could be the first step toward bringing Tate home.

As Theresa dreamed about her recent encounter with Summer (Marie Wilson), something clicked. Theresa will push Brady to accept that Summer must be to blame. She’ll remind Brady of Summer’s apparent threat.

Theresa thought it was odd when Summer warned her not to take Brady and her child for granted. She just didn’t realize Summer was capable of an actual abduction. Brady will have to admit that Theresa’s theory makes sense.

It’s surprising it took them this long to put it together. When a shady con woman leaves town the same day your son is kidnapped, it doesn’t take a rocket scientist to guess that she was behind it. It’s time to locate Summer and discover how to retrieve Tate.

Of course, money is usually involved when Summer makes a sneaky move. Days of Our Lives spoilers indicate that Brady and Theresa will try to determine who paid Summer to do this. Meanwhile, Summer’s plane will land and she’ll complete the transaction.

Once the deal is done, Summer will end up in Las Vegas. She’ll hope that she can avoid detection, but this gamble won’t pay off. DOOL spoilers say Theresa and Brady will manage to find Summer with a little help from John (Drake Hogestyn) and Paul (Christopher Sean).

Summer will get highly emotional during the confrontation. It seems Summer will have some regrets about what she’s done, but an apology isn’t going to cut it. Brady and Theresa are still minus one “Tater Tot.” Summer will plead for mercy, but Theresa will probably want to lock Summer up and throw away the key.

Whatever Summer admits will make Brady even more suspicious of Victor (John Aniston). Brady will once again grill his grandad about his possible involvement. If Victor is tangled up in this somehow, Brady will want to know. He’ll demand some honesty, but Days viewers know that’s not Victor’s strong suit.

DOOL spoilers suggest that a string of bad luck is coming for Brady and Theresa. This situation will get worse before it gets better. Nevertheless, the search is far from over. These heartbroken parents aren’t ready to give up.

Steve (Stephen Nichols) will eventually help out with the hunt as well. Will Salem’s sleuths manage to solve this mystery? Stick with Days of Our Lives for updates on where things are headed next.

So Days fans, what do you think about the news that Summer will get caught in Las Vegas? Who will have Tate by then? Is Victor involved or is Brady mistaken? Could Victor’s potential plot have taken a wrong turn?