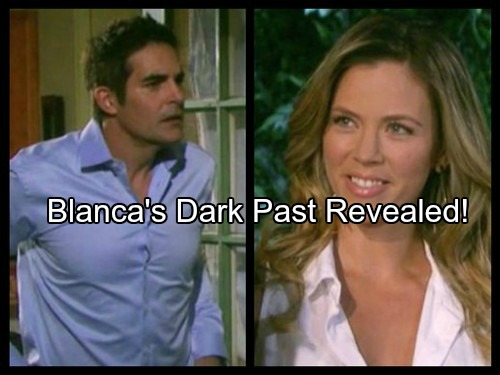 Days of Our Lives (DOOL) spoilers tease that Blanca (Ximena Duque) will have some issues to sort out. Ever since Blanca showed up in Salem, she’s been nothing but bubbly and fun. Days viewers know that Blanca is always pushing Rafe (Galen Gering) to loosen up.

Blanca may seem carefree, but there’s a hint of darkness in her past. DOOL spoilers indicate that Blanca will be confronted with painful memories. Something will cause Blanca’s history to resurface and she’ll find it difficult to deal with the sorrow.

Perhaps Blanca made poor choices or she had a loved one who didn’t treat her with the respect she deserved. Maybe it’s even a combination of those problems. Regardless, Blanca will have a tough time letting go. Days of Our Lives spoilers reveal that some tense encounters are coming up.

It appears Blanca has been running from her past. She’s been trying to ignore everything she’s lived through in hopes that it will just go away. That probably explains why Blanca was willing to leave home as soon as Adriana (Alma Delfina) called. Blanca must’ve wanted to push down any suffering she’s encountered in recent years.

Adriana was mainly thinking of Rafe when she invited Blanca to town. Hope (Kristian Alfonso) broke Rafe’s heart and he continues to pine for her. Adriana never thought Rafe and Hope were a suitable match anyway.

Since Aiden is on the verge of being exposed, it looks like it may open the door to a potential reunion for Hope and Rafe. Where does that leave Blanca? Dario (Jordi Vilasuso) might be a nice option. He already shared several warm moments with the blonde beauty.

Dario has certainly made his fair share of mistakes. He’s been involved in many con jobs with Summer (Marie Wilson). In fact, Dario is aware of crucial information about Summer’s latest gig. He’ll have to decide whether or not he should spill what he knows about Tate.

Nevertheless, Summer is the one Brady (Eric Martsolf) and Theresa (Jen Lilley) will really be gunning for. Dario should manage to skate by without any major backlash. He always manages to get himself out of all his jams.

Of course, Dario is still dealing with abandonment issues thanks to Eduardo (A Martinez). He’s also been rather unlucky in love. Blanca and Dario might be able to bond over their heartache. That’s apparently something they have in common. Stick with Days of Our Lives for updates on this pair’s potential spark.

So Days fans, what do you think about the news that problems from Blanca’s past will resurface? Will Blanca finally face what she’s been avoiding? Would Dario and Blanca make a cute couple? Could they help each other concentrate on the future?