‘Days of Our Lives’ Spoilers: Hope and Rafe Trapped After Bomb Detonates – Shawn Stunned by Explosion, Fears the Worst 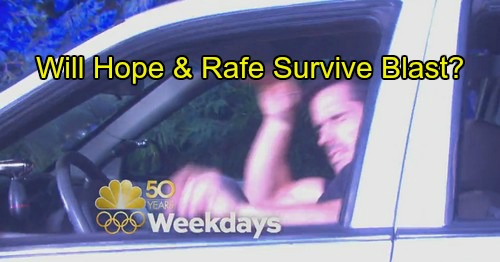 Days of Our Lives (DOOL) spoilers tease that we’ll see some explosive drama this week. We recently watched Rafe (Galen Gering) take a blow to the head while he was checking out the DiMera property. When he wakes up, Rafe will be chained to a bomb.

Hope (Kristian Alfonso) will get updates on Aiden’s (Daniel Cosgrove) lies and she’ll quickly make an arrest. Once that’s out of the way, Hope will turn her attention to Rafe. She’ll feel awful about what happened, but there’ll be time for apologies later.

DOOL spoilers say Rafe will be in grave danger and Hope will put her own life on the line to save him. After Hope tracks Rafe down, she’ll raise her gun and attempt to shoot a portion of the chain. Rafe will warn that she could blow the whole place sky high.

Hope will feel like she has no choice. They have to do something. Days spoilers say the bomb squad will be headed over, but there’s no way they’ll make it in time. Hope will fire a shot as Shawn (Brandon Beemer) arrives on the scene. He’ll be blown back in the car as the house explodes.

It looks like Andre (Thaao Penghlis) counted on Hope helping Rafe out of this jam. He figured Hope would rush to Rafe’s aid and get killed in the process. Andre still wants to avenge Stefano’s (Joseph Mascolo) death and he’ll be pleased that his plan seems to be paying off.

Andre shouldn’t be so sure he’s rid of these two. Days of Our Lives spoilers indicate that Rafe and Hope will manage to survive after the bomb detonates. That’s great news, but they won’t be out of the woods yet.

Days spoilers reveal that Rafe and Hope will be trapped in the cellar. The rest of the building could collapse at any moment. This is definitely a dire situation. Hope and Rafe could be injured as they wait under the rumble. On the bright side, this will give them time to reconnect.

Hope will probably take this opportunity to pour out her heart. She’ll want Rafe to know that she’s in love with him and she’s sorry she even considered moving forward with Aiden. Hope will insist that Rafe is the one she wants and needs.

Rafe and Hope may fear that the end is near. They’ll likely believe that death could be imminent if no one can reach them soon. Nevertheless, Hope will be happy that they’re in this together.

There’s a good chance we’ll see some steamy kisses in that basement. If they think they’re going to die, they might as well squeeze in a little passion. Once Hope and Rafe are finally safe, what else will Andre have in store? Aiden might even join forces with Andre to take down this dynamic duo.

Days of Our Lives buzz suggests that Hope and Rafe could get in trouble with the law thanks to Andre’s scheming. If he can’t actually murder them, then Andre might think prison is the next best thing. Rafe and Hope will pay the price if Andre has anything to say about it!

Could one or both of them land behind bars? We’ll keep you in the loop on any upcoming drama. Stay tuned to DOOL and don’t forget to check CDL often for the latest Days of Our Lives spoilers, updates and news.