‘Days of Our Lives’ Spoilers: Deimos Wants Clean Slate, Asks Nicole for Another Chance – Will Pregnant Chloe Spoil Their Plans? 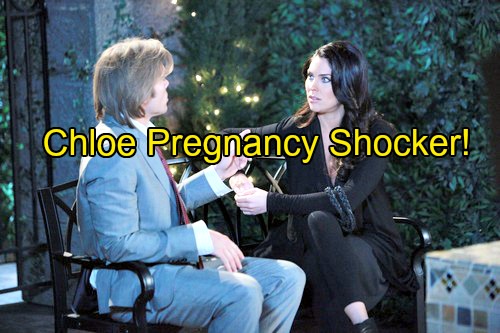 Days of Our Lives (DOOL) spoilers tease that Deimos (Vincent Irizarry) will try to clean up the mess Kate (Lauren Koslow) created. After telling the police a few fibs, they’ll finally be able to put all of this behind them – well, at least for now. Their mutual desire for revenge will undoubtedly prove too strong eventually.

Nevertheless, Deimos will attempt to focus on Nicole (Arianne Zucker). Days viewers know that Nicole has some doubts about Deimos. She realizes what he’s capable of and she doesn’t like it. Plus, Nicole is worried about Deimos being a bit of a ladies’ man.

Deimos was initially drawn to Kate. Then, he wanted Nicole. He even tried to marry Kate and keep Nicole as a sidepiece. Next, Deimos had sofa sex with Chloe (Nadia Bjorlin) and wanted to run away with her. Nicole appeared and Chloe was suddenly yesterday’s news. Sheesh, Deimos!

No one can blame Nicole for trying to be cautious. Still, Nicole can’t deny that she’s attracted to Deimos. After Daniel (Shawn Christian) died, Nicole wasn’t sure she would ever be able to move on. Her scheme to take Deimos down went off course when she found herself falling for her mark.

Perhaps Nicole appreciates the fact that Deimos is so different from Daniel. She loved Daniel with all her heart, but she spent most of their relationship feeling like a failure. Daniel could be judgmental at times. Nicole could never live up to his impossibly high standards.

With Deimos, Nicole can be who she is. She’s clearly the more ethical one, so maybe that’s a factor as well. Deimos will be living up to Nicole’s standards, not the other way around. Whatever the case, their chemistry is undeniable. Days of Our Lives fans have seen how these two look at each other.

Deimos developed feelings for Nicole because she looks like his dead lover, Helena (Arianne Zucker). However, it’s turned into much more than that. Deimos believes they could have something passionate and real. He wants to show Nicole a type of love that she’s never known before.

DOOL spoilers indicate that Kate will pack up her belongings and leave the mansion. With Kate officially out of the picture, Deimos will ask Nicole if they can just start over. He’ll want another chance to make this work. Will Nicole give Deimos one more shot? We’re betting that she’ll at least try.

Meanwhile, Chloe will continue to reconnect with Philip (John-Paul Lavoisier). They’ll heat things up soon, but there could be a problem. Days of Our Lives buzz suggests that Chloe may be pregnant. She might have a bun in the oven thanks to the aforementioned couch romp.

Will Deimos become a new father? Could the baby drama come between Deimos and Nicole? We’ll have to wait and see, but it sounds like an interesting possibility. Deimos cares about Chloe and he may shift his focus to her if a child is involved.

We’ll give you updates as this Days storyline moves forward. Some twists are likely in the works. Stay tuned to DOOL and don’t forget to check CDL often for the latest Days of Our Lives spoilers, updates and news.