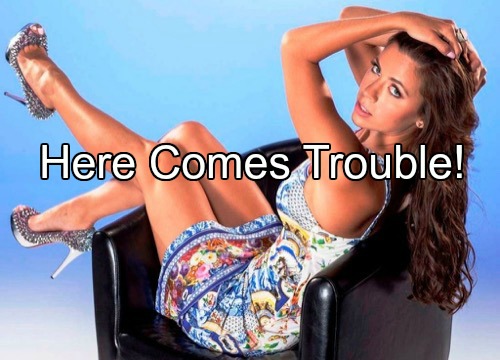 “Days of Our Lives” (DOOL) spoilers tease that Blanca (Ximena Duque) will arrive in Salem on this week’s episodes. We’ve been hearing about this DOOL character for months, but she’ll finally make her debut this week. “Days” fans will want to check out Blanca’s first appearance on Tuesday, June 7.

In an interview with Soap Opera Digest, Duque opened up about her new role. “Blanca is fun and sweet,” Duque said. “She brings happiness to the Hernandez family and Salem. She doesn’t come to make any trouble.”

Of course, Blanca will undoubtedly shake things up a little despite her intentions. Adriana (Alma Delfina) certainly has a plan in mind for this blonde beauty. She doesn’t approve of Rafe (Galen Gering) and Hope’s (Kristian Alfonso) relationship, so she’s presenting another option.

However, Blanca is running from something in her past. It sounds like Blanca has a painful history that she’s refusing to deal with. “Days of Our Lives” spoilers indicate that we’ll see Blanca tackle those issues down the road. For now, Blanca will be around to tempt Rafe with her good looks and charm.

When Duque’s manager called with the opportunity to test for DOOL, she figured she’d give it a shot. In SOD, Duque noted she wasn’t expecting to get the part. “I’m blonde and blue-eyed,” Duque said. “I didn’t think they would pick me because I didn’t look Mexican.” Duque sent in an audition tape anyway and was cast as Blanca the next week.

Duque was initially supposed to have a six-episode stint, but she’ll actually be sticking around much longer than that. She stated that she’s already done about 25 shows. This is the first time Duque has had an English-speaking role, but she’s been working with a coach to make sure she gets it right. Duque’s accent should give Blanca a feisty flavor.

Since Duque has starred on several telenovelas, she had no problem adjusting to the speedy soap schedule. According to Duque, her fan base intends on following her to “Days of Our Lives.” That’s great news! We can always use more viewers. Stay tuned the NBC soap for updates on Blanca’s storylines.

So “Days” fans, what do you think about Ximena Duque and her new role? Are you excited about seeing what’s in store for Blanca? Voice your opinion in the comments below and don’t forget to check CDL often for the latest “Days of Our Lives” spoilers, updates and news.