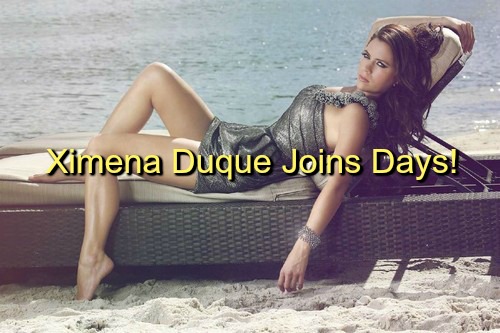 “Days of Our Lives” spoilers reveal that DOOL is adding to its cast once again. Varietylatino.com is reporting that Ximena Duque has joined the show as Blanca and will begin airing this May. It seems Blanca will have a story arc that relates to the Hernandez family. Duque will be working with Camila Banus (Gabi) and Galen Gering (Rafe).

As a bonus addition, we learned that Alma Delfina has joined the cast as Adriana Hernandez. Adriana is Rafe and Gabi’s mother, which means we should see “Days” dig deeper into the Hernandez clan’s background. Since we already have Eduardo (A Martinez) on the scene and Dario (Jordi Vilasuso) is on the way, it appears DOOL is committed to showcasing this family.

They’re continuing to expand the Hernandez circle with Blanca.

It’s possible that Blanca is a long-lost sibling or perhaps an old friend that will resurface. Blanca might even be Adriana’s nurse since her health problems have been mentioned in the past. Whatever the case, the addition of Duque could mean good news for “Days of Our Lives.”

This will be Duque’s English-language television debut, but she’s no stranger to a soapy format. The 30-year-old Colombian actress has starred on several telenovelas and could potentially bring her fan base to “Days.” Duque has 648,000 followers on Twitter and over a million followers on Instagram.

Duque’s fans could potentially become viewers of “Days” as well. We’ll take any boost in the ratings we can get!

Plus, it never hurts to add a little more diversity. That’s something the NBC soap has been striving to do over the past few months and they’re off to a nice start. It should be exciting to see what Blanca’s storyline involves and learn how long she’ll be sticking around.

We’ll give you updates as we find out more information. Stay tuned to “Days of Our Lives” to see Duque’s first appearance.

So “Days” fans, what do you think about the news that Ximena Duque has joined the cast of DOOL? Are you anxious to see how Blanca connects to the Hernandez family? Could Duque’s following help the show find some new viewers? Voice your opinion in the comments below and don’t forget to check CDL often for the latest “Days of Our Lives” spoilers, updates and news.