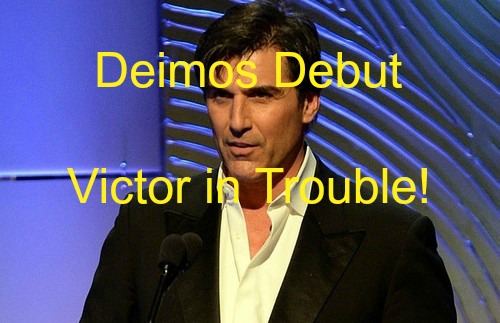 “Days of Our Lives” spoilers reveal that Vincent Irizarry will soon debut in the role of Deimos. This mysterious character will have ties to the Kiriakis family as well as a link to the DiMera clan. This new villain will be headed to Salem on January 18, but we should probably start preparing now.

You can bet that Deimos is going to stir up all kinds of trouble.

DOOL spoilers tease that Victor (John Aniston) will decide to open up to Maggie (Suzanne Rogers) about a deep secret. It looks like Deimos has a major beef with Victor and he’s coming to settle the score. It’s clear that a black cloud is looming for Victor.

Although it hasn’t been confirmed, “Days of Our Lives” buzz suggests that Victor framed Deimos’ father for a murder he didn’t commit. It sounds pretty shady, but have to remember that Victor has always had a villainous side. Victor just does a better job of hiding it than the DiMeras.

Speaking of the DiMeras, Deimos has apparently been tangled up in their web. After Dr. Malcolm’s (Adam Leadbeater) death, Rafe (Galen Gering) learned that the crooked doc been calling a number in Greece along with one in Salem.

Whatever the case, “Days” spoilers say Victor won’t appreciate Deimos’ sudden appearance. Victor’s past transgressions are obviously coming back to haunt him. Deimos will pose a serious threat to the Kiriakis family.

Victor will need to keep plenty of minions on standby to make sure he has all his bases covered. DOOL viewers can expect jaw-dropping moments and explosive drama once Deimos comes on the scene.

Of course, Deimos will likely find some time for love as he works for revenge. The question is: who will catch Deimos’ eye? Kate (Lauren Koslow) is currently involved with Eduardo (A Martinez), but resisting Deimos could prove difficult.

After all, Kate is the unofficial welcome party for brooding men with a dark past.

We also have a newly single Nicole (Arianne Zucker). She’ll be needing a new love interest eventually. However, Fynn (Alex Bruszt) seems poised to take on that role down the road. Nevertheless, the possibilities are endless for Deimos and what he’ll bring to the table.

Stick with “Days of Our Lives” for updates on Deimos and his upcoming plot.

So “Days” fans, what do you think about the news that Deimos will show up in Salem soon? Do you feel Vincent Irizarry will make a nice addition to the cast? Voice your opinions in the comments below and don’t forget to check CDL often for the latest “Days of Our Lives” spoilers, updates and news.