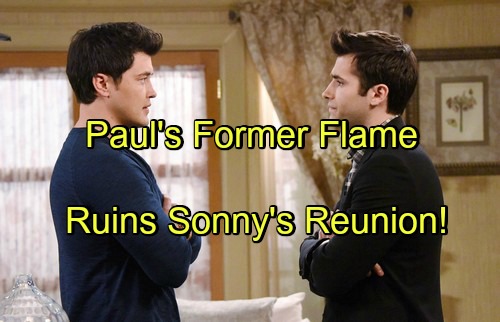 Days of Our Lives (DOOL) spoilers tease that Sonny (Freddie Smith) will decide it’s time for a chat with Paul (Christopher Sean). They’ve been sticking to friendship, but their last encounter may have changed things a bit. Sonny came to Paul’s rescue after the explosions hit Salem. He even performed mouth-to-mouth resuscitation during the chaos.

After Paul got patched up at the hospital, he looked somewhat uncomfortable. Sonny was a little uneasy, too. Neither one of them seemed certain about where their relationship was headed. Deep down, they both probably want more. Some honesty and a leap of faith are all it would take to reunite “PaulSon.”

It appears Sonny is starting to realize that. Days of Our Lives spoilers say Sonny will meet with Paul to get everything out in the open. He’ll want to discuss what happened and see if Paul is on the same page. Sonny has been hesitant to truly let go of Will (Guy Wilson), but he might be ready to close that chapter of his life.

Although Will is always going to hold a special place in Sonny’s heart, he’s obviously reserved a spot for Paul as well. These former flames have never forgotten the good times they shared. Perhaps Sonny will want to make some new memories. He might suggest that they should give their relationship another shot.

Paul would likely be open to the idea, but DOOL fans can expect this reunion to hit a big snag. Days of Our Lives spoilers indicate that Derrick (Spencer Neville) will pop up during Sonny and Paul’s conversation. Before Sonny can express his feelings, Derrick will capture Paul’s attention.

If you don’t remember Derrick, he’s the handsome bellhop who dated Paul briefly. Will was insecure and he thought he could fix the problem by setting up Paul with Derrick. It was all about eliminating the competition.

Paul and Derrick connected on some level, but their relationship never really took off. The timing just wasn’t right. However, Derrick’s return could put them back in business. Since Paul thinks Sonny isn’t all that interested, he may pursue something with Derrick. We can’t blame the guy for moving on.

How will Sonny react if Paul and Derrick grow closer? Will he get jealous? Could it prompt a love confession later on? Days viewers will be anxious to see where this storyline leads. In the meantime, Sonny may throw himself into work. Victor (John Aniston) will be giving Sonny plenty to do over the next few weeks.

A war is brewing between the Kiriakis family and the DiMeras. Chad started first battle after Titan Industries made a serious blunder. DiMera Enterprises capitalized on their mistake and it caused some conflict. Chad and Sonny managed to put the incident behind them, but more trouble is looming.

Eduardo (A Martinez) and Dario (Jordi Vilasuso) will soon throw a third company in the mix. Kate (Lauren Koslow) may even get in on the action. It sounds like some major corporate drama is coming up on Days.

Let’s hope Sonny won’t lose sight of his personal life. That could be a bad move if Sonny hopes to get back together with Paul. We’ll give you updates as other news emerges. Stay tuned to DOOL and don’t forget to check CDL often for the latest Days of Our Lives spoilers, updates and news.