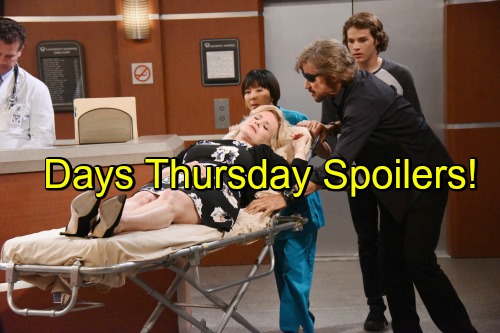 Days of Our Lives (DOOL) spoilers for Thursday, September 8, tease that Eve (Kassie DePaiva) will decide she needs to take her little sis out for a celebration. Theresa (Jen Lilley) is getting married and she simply must have a bachelorette party. Eve and Theresa will meet up with Nicole (Arianne Zucker) for a fun evening.

Theresa will open a gift or two and they’ll enjoy some cake at Club TBD. It doesn’t sound like anything too crazy, but the upcoming prison break will take care of that. Besides, Theresa has partied enough for a lifetime. She used to be the resident wild child on DOOL, but those days are behind her.

Orpheus will seem unsure about Xander at first, but Clyde will back up their newest partner. He’ll suggest that Xander can be a valuable asset. It’s clear that Xander has unfinished business he wants to deal with.

In addition to getting revenge on Theresa, Xander would like to make Nicole pay the price for duping him. Nicole escaped Xander’s evil clutches once, but he’s ready for a second shot. Orpheus, Clyde and Xander’s plot will soon take shape. Stick with Days to watch these baddies in action.

In the meantime, another baddie will have to answer for her behavior. Deimos (Vincent Irizarry) and Victor (John Aniston) will push Kate (Lauren Koslow) to admit that she ordered Tate’s kidnapping. After being confronted with evidence, Days of Our Lives spoilers say Kate will make a full confession.

Of course, Kate made sure to dig up some dirt on the Kiriakis brothers as an insurance policy. If they take her down, she’ll take them down as well. Kate won’t be going to prison over this mess, but Victor and Deimos don’t intend on going either. They’ll just have to find someone else to blame for the Tate snatching.

Elsewhere, Kayla (Mary Beth Evans) will be rushed to the hospital after collapsing. She vetoed the idea of surgery for her subdural hematoma, but it looks like she won’t have a choice now. Days of Our Lives spoilers indicate that Steve (Stephen Nichols) and Joey (James Lastovic) will panic when they get updates on Kayla’s sudden decline.

This medical crisis will make Steve realize just how dark his life would be if Kayla weren’t in it. They’ve been at odds lately, but Steve has never really lost sight of what he wants. Deep down, Steve’s world revolves around “Sweetness.” He won’t be able to imagine a future without Kayla.

Thankfully, Kayla will make a full recovery and Steve will fight for the woman he loves. A “Stayla” reunion is finally on the way! We’ll keep you posted as more news comes in. Stay tuned to DOOL and don’t forget to check CDL often for the latest Days of Our Lives spoilers, updates and news.