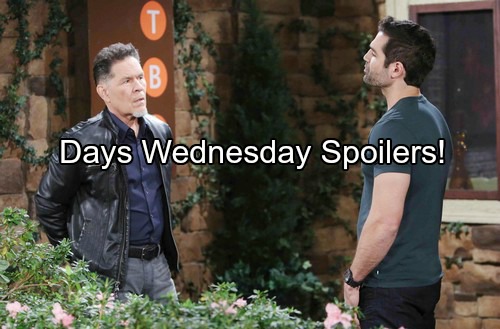 Days of Our Lives (DOOL) spoilers for Wednesday, August 3, tease that we’ll finally see someone follow through on the alarming threats Eduardo (A Martinez) has been receiving. Eduardo probably should’ve been warning his family members about the danger. Unfortunately, Gabi (Camila Banus) will be completely blindsided when someone emerges from the shadows.

Gabi will be attacked by a man with a mysterious message. There’s a good chance that more peril is coming up if Eduardo doesn’t act fast. Days of Our Lives spoilers indicate that Dario (Jordi Vilasuso) won’t be pleased when he gets updates on his sister’s ordeal. He’ll likely lash out at Eduardo for putting Gabi in harm’s way. Dario feels like Eduardo is trouble and they’d be better off without him around.

Deep down, Eduardo is undoubtedly starting to wonder if that’s true. The Hernandez clan has definitely faced a great deal of drama since Eduardo returned to Salem. Nevertheless, DOOL spoilers say Eduardo won’t want to bail on his family again unless it’s absolutely necessary. He’ll be determined to seek out the source of these threats and put a stop to them.

Days of Our Lives spoilers reveal that Eduardo will soon undertake a risky mission. He’ll be desperate to protect Adriana (Alma Delfina) and their kids. It sounds like Gabi’s attack will be a major wakeup call. Eduardo will realize he can’t let anyone play games with the lives of his loved ones.

Other Days spoilers suggest that Chloe (Nadia Bjorlin) will have to face some fears of her own. Now that she knows she’s pregnant, Chloe is trying to figure out what to do. She could really use some advice at the moment.

Luckily, Philip (John-Paul Lavoisier) will provide support and guidance. Chloe will confess that she has Deimos’ (Vincent Irizarry) bun in the oven and Philip will try to help her cope. It’s clear that Chloe doesn’t trust Deimos. She can also tell that he’s in love with Nicole (Arianne Zucker), which just makes all of this even more complicated.

Across town, Days spoilers say Deimos will pour out his heart. He’ll affirm his feelings for Nicole and assure her that they can have a bright future together. Nicole will be hesitant to move forward with Deimos, but she’s inching in that direction. These two will end up making love in Thursday’s episode.

Nicole will be almost as worried as Chloe when Deimos proposes after their sex session. It seems everything is moving just a bit too fast for both of these ladies. Chloe is about to have the baby of a man she barely knows and Nicole is falling for someone who may still be dangerous. They’ll have a lot on their minds in the coming weeks.

How will Deimos react when he eventually hears the baby news? Could that create a roadblock for Deimos and Nicole’s relationship? Stay tuned to DOOL and don’t forget to check CDL often for the latest Days of Our Lives spoilers, updates and news.