‘Days of Our Lives’ Spoilers: The Mastermind of Tate’s Kidnapping – Who’s Behind This Evil Scheme? 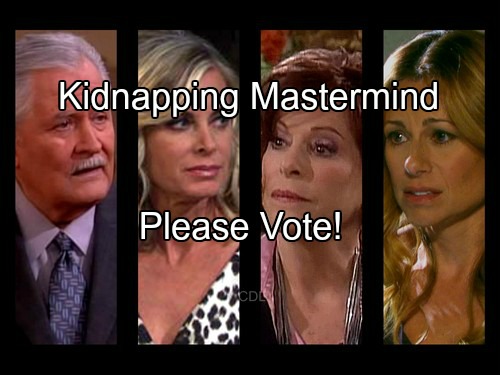 Days of Our Lives spoilers tease that John (Drake Hogestyn) and Brady (Eric Martsolf) will uncover an important clue. They’re focused on doing whatever they can to bring Tate home right away. Many DOOL viewers are ready to get some answers about Tate’s kidnapper. Days has given us an intriguing mystery with numerous possibilities for our villainous culprit.

Let’s examine the options and try to determine which one seems the most likely. It appears Summer (Marie Wilson) did the dirty work, but we want to know about the mastermind of this evil scheme. Who would want to steal Brady and Theresa’s (Jen Lilley) son?

First, we have Victor (John Aniston). He was certainly tossing a lot of veiled threats around before Tate disappeared. Victor wanted to teach Brady a lesson about his fiancée. He claims he didn’t do it, but Brady may not be completely satisfied that granddad’s hands are clean.

However, the Black Patch team is starting to believe Victor is a tad too obvious. It feels like the kidnapper wanted it to look like Victor so they wouldn’t dig for answers elsewhere. Brady’s hunches are wrong 99 percent of the time anyway.

Their doubts about Victor led them to Deimos (Vincent Irizarry). They figured Deimos would be the kind of guy who would torment Victor’s family and pin this on him. Nevertheless, Deimos assured Brady and John of his innocence.

Besides, Deimos has been busy floating down the river and trying to juggle his women. He hasn’t had much time to orchestrate a kidnapping. You may or may not believe Victor and Deimos’ claims, but there’s no concrete proof against them.

Next, we have Vivian Alamain (Louise Sorel). Days of Our Lives buzz has been hinting that Vivian might make a comeback soon. That created some speculation about Vivian being responsible for Tate’s kidnapping. She’s always found ways to make life difficult for the Kiriakis clan.

Vivian has a complicated history with Brady, which mean all of this could be about revenge. Then again, there’s another potential kidnapper we have to consider. Kristen (Eileen Davidson) would be a brilliant choice on the show’s part. She stole Theresa’s embryo and gave birth to Christopher (aka Tate).

In an ideal DOOL world, Kristen would be coming back from the “dead” to claim the child right about now. Unfortunately, Eileen Davidson tweeted that she wouldn’t be making a return this summer. Your vote in this poll may depend on if you believe her.

As for our last option, perhaps we should just say “other.” You never really know who will pop up in Salem. Several unannounced Days of Our Lives returns are on the horizon. One of these mystery homecomings could be revealed as the kidnapper. It’s anybody’s guess who will emerge as the brains of this operation.

So Days fans, who gets your vote? Who do you think seems like the most likely culprit of this Tate snatching? We’ll give you updates as more DOOL news comes in. Vote for your kidnapper pick and don’t forget to check CDL often for the latest Days of Our Lives spoilers, updates and news.