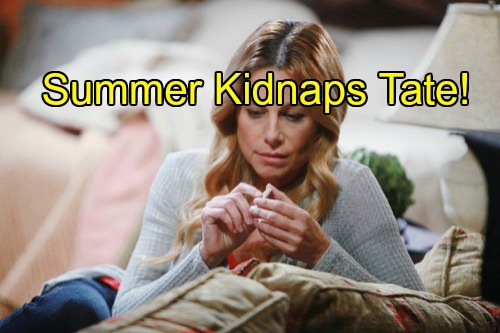 Days of Our Lives (DOOL) spoilers reveal that trouble is brewing for Theresa (Jen Lilley). She currently has a lot on her mind thanks to Summer (Marie Wilson) and Victor (John Aniston). Theresa knows that Summer is in love with Brady (Eric Martsolf) and she isn’t happy about it.

As for Victor, he takes great pleasure in making Theresa’s life miserable.

Both Summer and Victor would like to derail Theresa’s marriage to Brady. Of course, Victor isn’t a big fan of Summer either. He undoubtedly wants to get rid of her, too. During a chat with Caroline (Peggy McCay), Victor hinted that he might have a trick or two up his sleeve.

He always seems to have an evil plan in the works.

Days of Our Lives spoilers indicate that Theresa will visit the park with Tate. Unfortunately, Theresa will doze off while she’s there. Everyone knows the park is pretty much the most dangerous spot in Salem. Bad things can happen, especially when you’re taking a little catnap. 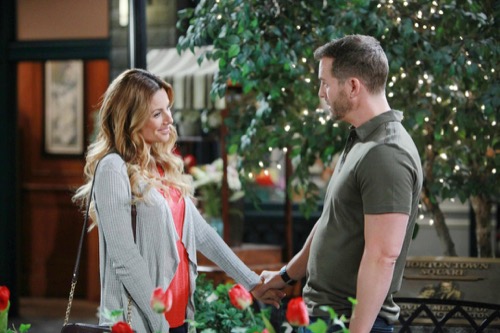 Will Tate be kidnapped while Theresa sleeps nearby? It sounds like a good possibility. Days spoilers say Summer will find a bag of cash waiting in her hotel room. She’ll also receive instructions on her next move. Could Summer steal Tate after getting devious orders?

It’s worth pointing out that Brady will soon tell Summer to get lost. The deception surrounding Clark’s (Josh Burrow) death will just be too much for Brady and Maggie (Suzanne Rogers) to deal with. That’s important since Summer may feel like she has nothing left to lose.

She might as well make some extra dough before she heads off.

DOOL spoilers say Summer will eventually board a plane for parts unknown. A baby will be heard crying beside her. Tate’s kidnapping could be what brings Shane (Charles Shaughnessy) and Kim (Patsy Pease) back to Salem. They may return to provide support.

Here’s where this storyline gets tricky. We have to talk about the person who orchestrated all of this. Would Victor really ask Summer to kidnap Tate? We wouldn’t put it past him if he intended it to be a short abduction.

Perhaps Victor simply wants to make Theresa look like an unfit mother. Then, Summer could get caught and Maggie’s fury would get her out of the picture permanently. Victor could kill two birds with one stone. Victor obviously wants Tate to carry on the Kiriakis legacy. He wouldn’t just let Summer steal his great-grandchild forever.

Then again, there’s another possibility we have to consider. What if Victor’s hatred for Theresa is a red herring? Maybe we’re supposed to suspect that Victor is behind this kidnapping plot. In reality, it could be someone equally devious and powerful. Kristen DiMera (Eileen Davidson) immediately comes to mind.

Days viewers know that Kristen is presumed dead, but we also know that’s almost a guarantee that she’s still alive. No body means no demise on a soap. Kristen has plenty of minions and she’s sent them to do her dirty work in the past. That might be what’s going on.

There’s already been some buzz about a possible Kristen return.

Could Kristen rope Summer into her scheme? She would definitely want Tate (aka Christopher) back. Kristen was raising him as her own child before Theresa found out about the stolen embryo. This would be an excellent way to write Kristen in for a while.

It would be fantastic news for DOOL fans!

Whether Victor or Kristen is to blame, you can bet that Theresa is in for a rough time. She’ll feel responsible when Tate goes missing. This ordeal is sure to put a strain on Theresa’s relationship with Brady. Stick with Days of Our Lives for updates on the conflict.

Chime in with your thoughts in the comments below and don’t forget to check CDL often for the latest Days of Our Lives spoilers, updates and news.