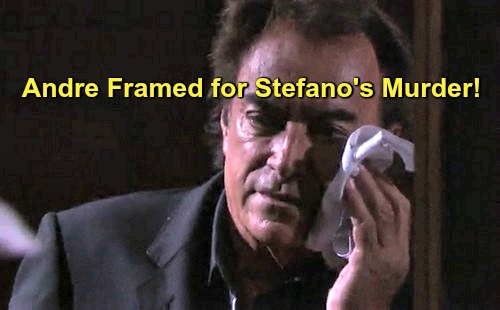 “Days of Our Lives” spoilers (DOOL) reveal that Hope (Kristian Alfonso) and Rafe (Galen Gering) will come up with a brilliant plan to turn the tables on Andre (Thaao Penghlis). When Hope realizes that Andre was behind the fire at her house, she’ll understand that he’s serious about getting revenge. Rafe and Hope desperately need to put themselves in a position of power.

Fortunately, there might be a way to gain the upper hand. DOOL spoilers indicate that Rafe will help Hope carry out a risky scheme. We don’t know all the details just yet, but the idea is to make Andre look like Stefano’s (Joseph Mascolo) killer. They’ll frame Andre in an effort to bring him down and divert suspicion away from Hope.

Once Hope and Rafe work their magic, they can sit back and watch the aftermath from a distance. Chad (Billy Flynn) will certainly buy what they’re selling. “Days of Our Lives” spoilers tease that Chad will lash out at Andre and accuse him of murdering their father. Andre will vehemently deny it and insist that he’s been set up.

Chad was already hesitant to believe that Hope would actually murder Stefano in cold blood. Killing Stefano was completely out of character for Hope. Conversely, this gruesome act seems right up Andre’s alley. Chad will likely contend that Andre killed Stefano to make himself the head of the DiMera dynasty.

You have to hand it to Hope and Rafe. This might be the smartest move they’ve made since the cover-up began. It’s entirely believable that Andre would’ve taken his father out. Even “Days” fans would’ve believed if we hadn’t watched Hope do the deed.

Nevertheless, something is bound to go wrong. If a soapy plot sounds like a good solution, it usually isn’t. No one would be surprised if this setup backfired. Andre will undoubtedly be more determined than ever to get vengeance.

This is just another reason for Andre to come after Hope and her family. When Andre gets off the hook, there’s going to be trouble. Will Andre finally get retribution? DOOL viewers will want to stay tuned for the cutthroat battle. Stick with “Days of Our Lives” for updates on how Andre will retaliate.

So “Days” fans, what do you think about the news that Hope and Rafe will frame Andre for Stefano’s murder? Will Andre convince Chad that he’s not responsible? Will Andre prove his innocence and fight back?