‘Days of Our Lives’ Spoilers: Jade and Joey’s Romance Heats Up – Paige Searcy and James Lastovic Dating In Real Life? 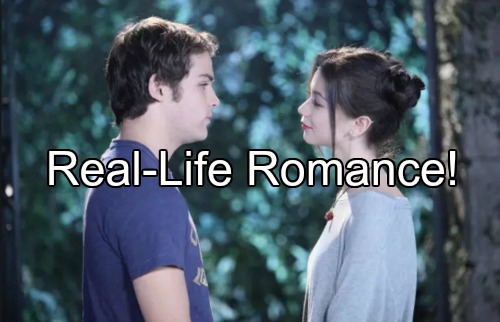 Days of Our Lives (DOOL) spoilers suggest that love is blooming on screen and off. Based on several social media posts, it looks like Paige Searcy (Jade) and James Lastovic (Joey) are an item. Neither one of them has confirmed their status, but a picture’s worth a thousand words.

When Searcy celebrated a birthday a few weeks ago, Lastovic posted a sweet photo of her on his Instagram account. He simply captioned it with a heart. We should also point out that Lastovic was the only Days of Our Lives star who attended Searcy’s high school graduation ceremony. Searcy tweeted out a pic that showed Lastovic with his arm around her.

In addition, Searcy posted a short video of Lastovic and a cuddly pup on Instagram. She called them her “little babies,” so it’s clear that they’re close. It’s obvious that some serious chemistry is going on between Searcy and Lastovic’s characters, too. Jade and Joey spend most of their airtime making out.

We definitely wouldn’t be surprised if the sparks are still flying after the cameras stop rolling. Searcy’s future with Days is a tad uncertain right now. There’s been no confirmation on the length of her stay at DOOL. However, Lastovic and Searcy will have a chance to work together on a different project.

Searcy, Lastovic and Jen Lilley (Theresa) are all filming a new movie for Lifetime. “Mommy, I Didn’t Do It” is a thriller that Days of Our Lives fans won’t want to miss. If you’re a Bold and the Beautiful viewer as well, we should mention that Heather Tom (Katie) will be a part of this film. Jaleel White from Family Matters and Danica McKellar from The Wonder Years will round out the cast.

This film is just starting to take shape, which means the release won’t be happening anytime soon. We’ll keep an eye on production and let you know when more news emerges. It sounds like something many soap watchers will want to check out.

Until then, you can watch Jade and Joey continue to heat things up on Days. Jade’s father, Hal (Real Andrews), isn’t pleased with their relationship. Will he try to tear them apart? What about Kayla’s feelings toward Jade? Will she ever warm up to Joey’s number one gal? Time will tell, but DOOL intends on packing in some serious drama.

We’ll give you updates if we hear anything else about Jade and Joey’s future or the apparent romance of their portrayers. They’re staying tight-lipped, but their coziness tells the story! Stick with the NBC soap and don’t forget to check CDL often for the latest Days of Our Lives spoilers, updates and news.