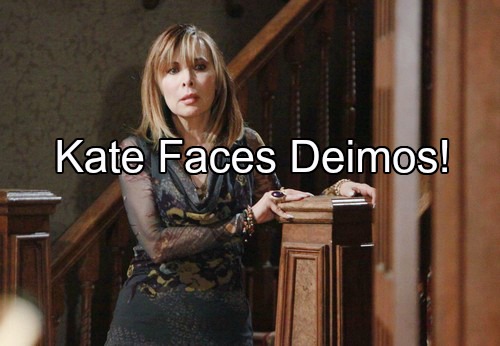 Days of Our Lives (DOOL) spoilers tease that Kate (Lauren Koslow) will be unsettled when Deimos (Vincent Irizarry) makes his triumphant return to the mansion. She’ll worry that Deimos intends on getting revenge. He’s obviously a force to be reckoned with.

Maggie (Suzanne Rogers) was poisoned and paralyzed after Deimos put his plan against Victor (John Aniston) into action. Days of Our Lives spoilers reveal that Kate will become concerned about her own fate. The fear of the unknown can be brutal when you’re dealing with a guy like Deimos.

Of course, that doesn’t mean Kate will just cower in the corner. She’ll put her usual spunk on display as she battles her terror. Kate should still be dealing with some anger, too. After all, Deimos’ feelings for Nicole (Arianne Zucker) are what started this mess.

Now that Deimos is back, he’ll undoubtedly make Kate squirm. DOOL spoilers indicate that Kate’s rage toward Deimos will grow. She’ll even have fantasies of shooting and stabbing Deimos.

Kate will probably think she should’ve used one of those killing methods instead. A river ride just doesn’t guarantee death in Salem. That’s been proven on more than one occasion. Nevertheless, what’s done is done. Deimos is alive and Kate will have to deal with that.

Fortunately, Deimos’ desire for Nicole may actually be what saves Kate. Days viewers know that Nicole has been pushing Deimos to turn his life around. He hopes to be the person Nicole wants him to be. It’s the only way they’re going to have a fighting chance as a couple.

As a result, Deimos may forgo his vengeance plans and settle this without violence.

Next week, Days spoilers say Deimos and Kate will approach the police with a story they’ve concocted. Perhaps they’ll make some sort of agreement. Maybe they’ll strike a deal that could help them both out. Regardless, Nicole should just be glad to have the whole ordeal behind her.

Things have been tough for Nicole lately, but she’ll be optimistic about the future. Nicole shouldn’t get her hopes up too high. Days of Our Lives buzz indicates that Chloe (Nadia Bjorlin) will likely discover she’s pregnant.

DOOL made a point to show Deimos connecting with Parker (Christian Ganiere). He also mentioned that he’d never had children. These anvils could signal that Deimos will be a proud papa eventually. If Chloe hooks up with Philip (John-Paul Lavoisier) pretty soon, the baby’s paternity would be questioned.

Still, there’s a very real possibility that Deimos will be a new father.

Would that pull Deimos and Chloe closer? It would at least make pursuing a relationship with Nicole more difficult. Chloe and Nicole have a similar taste in men, as evidenced by their romances with Brady (Eric Martsolf) and Daniel (Shawn Christian).

That’s why Chloe was so outraged when she realized Deimos was in love with Nicole. This is a road she doesn’t want to go down again. Will Nicole and Chloe end up vying for Deimos’ heart anyway? We’ll give you updates if any other news emerges.