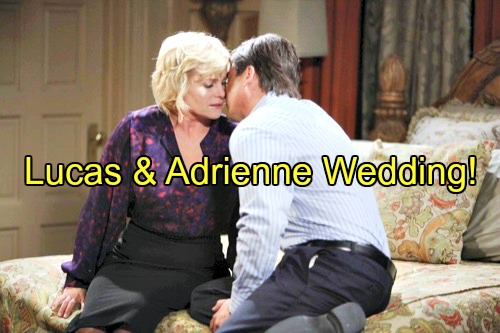 Days of Our Lives (DOOL) spoilers tease that we’re about to kick off a major love fest on the NBC soap. Viewers can expect plenty of romance over the next few months, including several proposals. Next week’s episodes tell us Adrienne (Judi Evans) and Lucas (Bryan Dattilo) will spend some time reconnecting. Lucas will hope that they can find their spark again.

Adrienne and Lucas have been MIA lately, but that may change in the coming weeks. Days of Our Lives spoilers suggest that Lucas will realize he has deep feelings for Adrienne and he doesn’t want to let this chance slip away. He’ll pop the question and a stunned Adrienne will decide to take that leap.

Of course, an engagement means that wedding preparations will soon get underway. DOOL spoilers say Lucas and Adrienne’s nuptials will transpire this fall, so there’s a lot to do between now and then. When Sonny (Freddie Smith) shows up in July, he’ll be surprised and slightly disappointed by his mom’s big news.

We can’t blame Sonny for being bummed. His parents faced issues and that ultimately led to their divorce. However, Justin (Wally Kurth) and Adrienne have overcome struggles in the past. They always drift apart and find their way back to each other. Sonny will wish it could’ve happened once more.

Adrienne and Justin are arguably one of those meant-to-be supercouples. Their romantic history dates back to the late ‘80s. There are undoubtedly some lingering feelings for these two, even if they don’t want to admit it. Days might choose to reunite them down the road.

It’s worth mentioning that Dena Higley, one of DOOL’s head writers, seemed excited about writing for Justin and Adrienne when she returned to the NBC soap. Higley tweeted that she was “looking forward to playing great story with Wally and Judi…” We haven’t really seen much of a story between them over the past year or so.

Either Higley changed her mind or it’s still to come.

Days of Our Lives spoilers reveal that a ceremony for Adrienne and Lucas will definitely take place, but we don’t know if they’ll actually say “I do.” Regardless, this wedding will feature intense drama. It’s been a long time since someone tried to stop a former flame’s nuptials.

Perhaps Justin could object to this couple’s union and make a desperate declaration of love.

Kate (Lauren Koslow) could easily derail the wedding, too. She usually has a problem with her son’s love interests. Still, there’s no guarantee that Adrienne would leave Lucas at the altar. Maybe this is simply the end of Justin and Adrienne’s era. Goodness knows Lucas deserves a break.

He’s had more failed romances than Days fans can count.

Will Lucas and Adrienne get their “happily ever after” (at least for a while)? Will Justin suddenly realize he’s losing the love of his life? Things are probably going to get pretty complicated. Stay tuned for updates on where this love triangle is headed and don’t forget to check CDL often for the latest Days of Our Lives spoilers, updates and news.