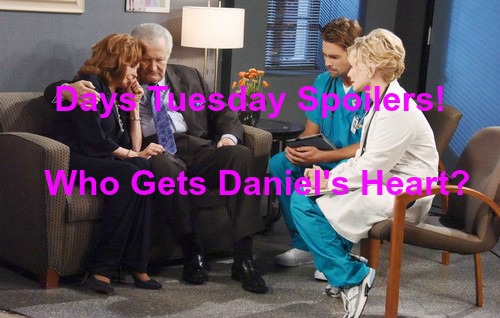 “Days of Our Lives” spoilers for Tuesday, January 5, tease that Nicole (Arianne Zucker) will lash out as she deals with her loss. When Nicole hears that Jennifer (Melissa Reeves) swerved and hit a patch of black ice, she’ll rip into her for her role in the crash.

Jennifer will understand that Nicole is in a lot of pain right now. In fact, Jen undoubtedly feels terrible about what happened.

However, intoxicated Eric (Greg Vaughan) was actually at fault for this accident. Nicole will get the news soon and she’ll be furious that Eric took Daniel (Shawn Christian) from her.

Meanwhile, Maggie (Suzanne Rogers) will continue to mull over whether Eric or Brady (Eric Martsolf) should get Daniel’s heart. DOOL spoilers say Victor (John Aniston) will comfort Maggie as she decides which one will receive the gift of life.

Other “Days of Our Lives” spoilers indicate that the tension will lift between Theresa (Jen Lilley) and John (Drake Hogestyn). It’s no secret that John isn’t exactly fond of Theresa. No one can really blame him for that. After all, Theresa once put John in a coma by whacking him in the head with a fireplace poker.

John might still be comatose if it hadn’t been for the groundbreaking treatment Kristen (Eileen Davidson) provided. Nevertheless, Theresa has been sobbing at Brady’s bedside and it’s easy for John to see that she truly cares. It looks like John will begin to warm up to Theresa during this time of crisis.

Nearby, Chad (Billy Flynn) will storm in and start making demands. “Days” spoilers reveal that Chad will insist on having another paternity test done. He’ll want to make sure Abigail (Kate Mansi) is telling the truth. When the results confirm that Thomas is indeed his son, Chad will be livid.

It’s going to take a moment for Chad to wrap his head around all of this, but he’ll come around eventually. DOOL viewers can expect a “Chabby” family reunion later this week. Stick with “Days of Our Lives” for updates on Chad’s fading trance.

So “Days” fans, what do you think about Nicole verbally attacking Jennifer? Will John and Theresa make peace for Brady’s sake? Are you glad to see the beginning of a new chapter for Chad and Abigail? Voice your opinion in the comments below and don’t forget to check CDL often for the latest “Days of Our Lives” spoilers, updates and news.