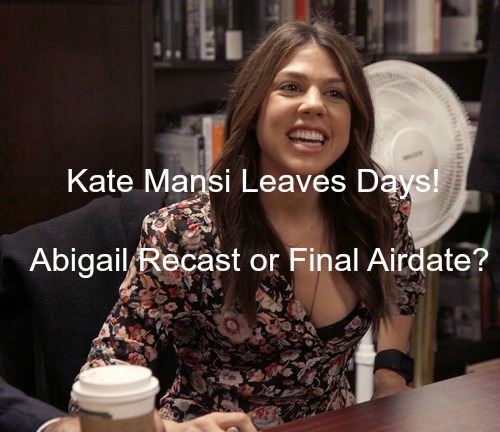 “Days of Our Lives” (DOOL) spoilers reveal that Kate Mansi, portrayer of Abigail Devereaux, is leaving the show! There has been talk for months that this was in the works, but now it is confirmed by Serial Scoop. This is just another in a series of cast shakeups at the NBC soap and we have Mansi’s final air date, or at least approximate one, for you!

Abigail’s departure is significant because she’s in a major storyline with Chad DiMera (Billy Flynn) and Salem serial killer Ben Weston (Robert Scott Wilson). She just gave birth to a baby, Thomas, that was supposedly Ben’s child but now may turn out to be the son of Chad instead.

DOOL spoilers tease that Mansi is all done shooting on the Days of Our Lives set but that she’s taped enough episodes to carry her character Abigail out through May when Mansi exits the show for good. Her contract expired in December and it looks like there was no renewal so she’s out the door. This makes Abby’s final airdate between mid-May and mid-June as DOOL films 5 1/2 months is advance.

DOOL fans of the Chabby couple won’t like the loss of a favorite couple and it leads to questions of whether this is slated to be a character departure or an actor recast. Soap spoilers and blind items have teased for months that Sony would mandate budget cuts at Days which means trimming the cast.

If this is true, it may be an exit rather than a recast. Mansi would have hit her five-year anniversary with DOOL in March and she was the sixth actress to fill the shoes of Abby. In a recent interview with Glamour magazine, Mansi revealed she originally auditioned for the role of Melanie Jonas but then TPTB at DOOL went another way and she decided to return to college.

Once she graduated, she was called back to read to replace Ashley Benson as Abby. They asked her to dye her hair blonde before she came in for the meeting. She revealed that her long-time boyfriend dumped her the night before her audition and she was unsure about the lighter hair, but she still nailed the read and was immediately put on contract – her first big role and it was major.

Magazine interviews often take place months before a publication goes into print and it doesn’t read like Mansi had any idea that she would be off the show shortly after the issue was released. This leaves DOOL fans with tons of questions – is Abby being killed off? Will something happen to her baby? Will she simply leave Salem so the character is available for a recast return?

What does Abby’s exit mean for Chad and their son Thomas? DOOL spoilers also indicate that Chad will soon propose marriage – how will the proposal play into the exit storyline? Is this a casting cut because of tighter budgets or a recast because Mansi and the DOOL showrunners couldn’t come to terms on a renewal contract?

Stay tuned to CDL for more on this DOOL cast shakeup and also check back with us daily for “Days of Our Lives” spoilers, news and more.