Days of Our Lives (DOOL) Spoilers: Maggie Donates Dying Daniel’s Heart – Will She Save Brady or Eric? 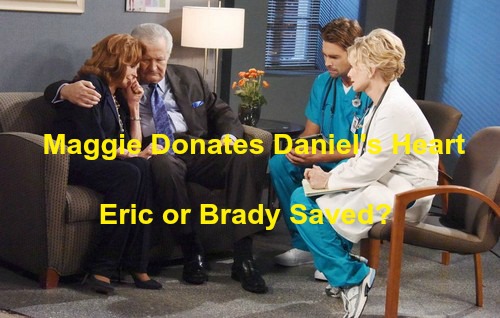 “Days of Our Lives” spoilers reveal that Maggie (Suzanne Rogers) will be crushed when a tragic accident kills her son. Daniel (Shawn Christian) will essentially be gone, but his heart could still give life to another victim. DOOL’s weekly preview video shows Brady (Eric Martsolf) and Eric (Greg Vaughan) in a desperate fight for survival.

Eric and Brady will both need a new heart, but which one will get Daniel’s? “Days of Our Lives” spoilers say Maggie will be incredibly torn about what to do. How can Maggie choose who lives and who dies? This will undoubtedly be the toughest decision Maggie has ever had to make.

Maggie won’t want to lose either one of them, but she’ll have to make her choice soon. Brady is Victor’s (John Aniston) grandson and despite their recent disagreement, they’re very close. Maggie may want to spare Victor the pain of losing Brady just weeks after losing Bo (Peter Reckell).

On the other hand, it could be difficult to pass right over Eric. He might be in worse shape than Brady. This is certainly quite a dilemma!

Since Eric caused the crash by driving drunk, it would be unbelievably soapy if he was given Daniel’s heart. The man Eric killed could give him life. Nevertheless, there’s no denying that Maggie is closer to Brady. Whatever happens, it appears both men will ultimately pull through.

We know Brady will survive thanks to upcoming “Days of Our Lives” spoilers. As for Eric, Greg Vaughan has hinted in interviews that he has great material coming up for his exit in mid-April.

“Days” probably won’t leave Eric trapped in a hospital bed and on life support for months. Instead, Eric will likely recover and be forced to face the consequences of what he’s done. DOOL buzz suggests that Eric will pay a steep price for his actions.

In addition to a massive amount of guilt, Eric could end up in jail or at least rehab. Stick with the NBC soap for updates on what’s next for Eric.

So “Days” fans, what do you think about the news that Maggie will have to decide whether Eric or Brady gets Daniel’s heart? Which one will Maggie choose? What does the future hold for Brady, Eric and everyone else affected by this situation?