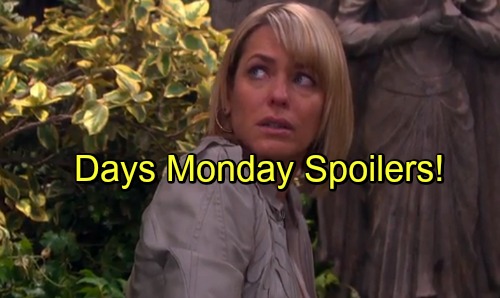 Days of Our Lives (DOOL) spoilers for Monday, October 10, tease that Marlena (Deidre Hall) will share her plan to stop Orpheus (George DelHoyo), Clyde (James Read) and Xander (Paul Telfer). She’s been gathering as much info as possible about these fugitives.

Marlena has paired her personal experience with the accounts of others. She now has a good grip on what makes these villains tick.

John (Drake Hogestyn) will be on board with Marlena’s scheme. Days spoilers reveal that they’ll spread the news as they plot to take convicts down. They’ll need all hands on deck for this mission. Steve (Stephen Nichols) and Kayla (Mary Beth Evans) will want to pitch in.

They’re incredibly grateful to have Joey (James Lastovic) home, but they still hope to put an end to the continued threat.

Days of Our Lives spoilers say Kayla and Steve will fill Chad (Billy Flynn) in on the plan. They’ll give Kate (Lauren Koslow) updates, too. Chad and Kate could be used as bait for Clyde if they’re willing. However, Chad will have a better idea.

He’ll keep Kate out of it for her safety. Andre (Thaao Penghlis) and Chad will try to handle Clyde with a little help from Lucas (Bryan Dattilo) and Adrienne (Judi Evans).

Elsewhere, Nicole (Arianne Zucker) will mull over everything that’s been going on with Deimos (Vincent Irizarry). He promised Nicole that he would never lie to her, but it’s clear that Deimos still keeps secrets. Deimos seems to think that what Nicole doesn’t know won’t hurt her. Unfortunately, this is damaging the trust between them.

Nevertheless, Nicole can’t help but love Deimos. She’s really fallen for him and that continually clouds her judgment. Nicole should probably be running in the opposite direction, but there’s something about Deimos that draws her in.

Days spoilers indicate that Nicole will talk to Brady (Eric Martsolf) about her Deimos issues. Brady is always willing to listen when his friend needs him. Nicole will open up and Brady will give her some advice. Of course, Brady has problems of his own to deal with. Xander is targeting his family and it could spell trouble pretty soon.

DOOL viewers know that Xander tried to kill Theresa (Jen Lilley) on her wedding day. She managed to escape death, but things haven’t improved much in Salem. Theresa realizes that Xander could come after her or her child. She’s also worried about what might happen to Brady. Xander isn’t exactly a big fan of anybody connected to the Kiriakis clan.

Days of Our Lives spoilers state that Theresa will start to crumble under the pressure. She’s full of fear and regret right now. We can’t forget that Theresa lied about the attempted rape allegations. She feels partially responsible for Xander’s current behavior.

Tough times are coming up for Theresa, but she’ll manage to share some warm moments with Brady this week. This is definitely the calm before the storm. Stay tuned to DOOL and don’t forget to check CDL often for the latest Days of Our Lives spoilers, updates and news.

In a thrilling episode of #DAYS, Clyde shares with Orpheus his desire to make things up to his son. https://t.co/T880QlLWLt pic.twitter.com/yWb9754ytq