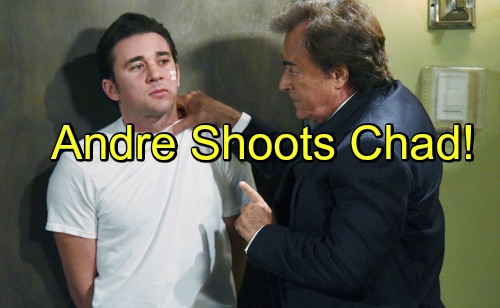 Days of Our Lives (DOOL) spoilers tease that Chad (Billy Flynn) will find himself in a tricky situation. Clyde (James Read) is determined to take Thomas for Ben (Robert Scott Wilson). He’s somehow delusional enough to believe that they can all be a happy family. Chad is equally determined to protect his son from this maniac.

Of course, Orpheus (George DelHoyo) and Xander (Paul Telfer) also need to be stopped. All of Salem is in danger and Marlena (Deidre Hall) has a plan to end the villains’ revenge tour. She’ll share her idea with her friends and family next week. Marlena will be convinced that they can pull this off.

There’s a bit of a problem though. They need some bait to attract the fugitives. Days of Our Lives spoilers say Chad and Kate (Lauren Koslow) will be asked to pitch in. This would be a risky move, but it might be worth it.

Chad won’t be sure that’s the best strategy. He’ll worry about Kate getting hurt or killed. Something could easily go wrong in the midst of the frightening encounter. Instead, Chad will create his own plot with Andre (Thaao Penghlis). These two should make a nice team.

Andre has the mind of a villain because he IS a villain. Luckily, he’s a lot more jovial than the convicts who are running amok. Like Stefano (Joseph Mascolo), Andre has a softer side. He can be ruthless, but family is his weakness. Chad is all Andre has left and he wants to be there for him.

DOOL spoilers suggest that Andre and Chad will prepare for a stunning showdown. If this scheme is going to work, Chad will need to trust Andre. He may not be ready to put total faith in his brother, but that’s OK. Baby steps are fine for now.

Andre will meet up with Clyde and explain where he can find Thomas. He’ll make it seem like Chad is arrogant and needs to be taken down a notch. Later, Clyde will arrive at the mansion and Chad will give him some serious attitude. He’ll hope that Clyde will buy his act.

Here’s where it gets interesting. Days of Our Lives spoilers reveal that Andre will whip out a gun and point it in Chad’s direction. A shot will be fired and Chad will fall to the floor. As blood gushes, Andre will encourage Clyde to go get the baby.

Days spoilers say Lucas (Bryan Dattilo) and Adrienne (Judi Evans) will witness at least part of the mayhem. They’ll be in shock over Andre’s actions. However, there’s a big twist coming. It looks like this was all part of the plan.

Perhaps Chad will wear a bullet proof vest and the blood will just be some classic trickery.

There’s a good chance Clyde won’t find Thomas when he enters a nearby room. Will cops be waiting? Is this another type of deadly trap instead? Either way, Clyde won’t be playing Grandpa to a DiMera child.

Days fans can expect plenty of excitement as this storyline reaches its climax. We’ll give you updates as more news comes in. Stay tuned to DOOL and don’t forget to check CDL often for the latest Days of Our Lives spoilers, updates and news.