‘Days of Our Lives’ Spoilers: Mystery of Abigail’s Disappearance Deepens, Was She Kidnapped – Can ‘Chabby’ Rebuild Marriage? 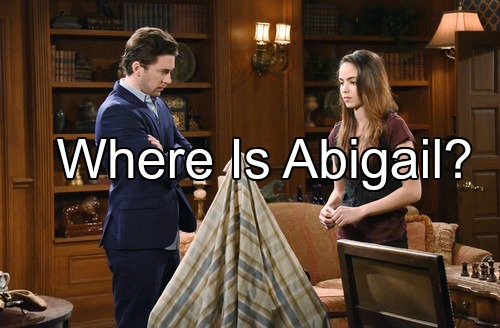 Days of Our Lives (DOOL) spoilers tease that Chad (Billy Flynn) will feel like his life has lost all meaning. He won’t know how he can move forward without Abigail (Kate Mansi) by his side. When Chad married Abby, he hoped they could settle down and focus on their family. Chad envisioned a great future in their happy home.

Unfortunately, everything Abigail went through took a toll on her mental health. Ben (Robert Scott Wilson) was a monster and he tormented Abby until the very end. Of course, the “end” is more about closing a Days chapter. Abigail isn’t gone for good.

Marci Miller will debut on DOOL this fall, which means Abigail will be back in Salem before you know it. That should give us plenty of storyline opportunities. Everyone has questions and we can’t wait for Days of Our Lives to provide the answers.

Did Andre (Thaao Penghlis) have something to do with Abigail’s disappearance or is he simply taking advantage of the situation? It’s possible that Andre has no idea where Abigail is. Just because he faked Abigail’s death doesn’t necessarily mean he’s holding her captive.

On the other hand, it definitely sounds like something Andre would do. Captivity is his middle name! The DiMeras have always loved their dungeons. Still, we can’t count out the notion that someone else out there snatched Abigail up.

One of Clyde’s (James Read) minions might be an option. Days spoilers say Clyde will pop up in September as part of a jailbreak plot, but he could have other irons in the fire. You can bet that Clyde would want revenge for Ben.

Abigail barbecued Clyde’s son to a crisp! Clyde wouldn’t want to let that go. Something seemed suspicious at that psychiatric facility, too. With a place named Shady Hills, you just can’t trust the staff.

Perhaps Abigail was given drugs to make her worse. She wasn’t doing well when she checked in, but she really went off the deep end after she began her Shady Hills stint. Some of the workers may have been in on an evil scheme.

We know that Dr. Robinson (Anne-Marie Johnson) has additional airdates coming up. She’ll be involved in the storyline in some way. Regardless of how this plays out, Chad will have a lot to deal with. He’ll be overjoyed by the news that Abigail is alive, but there could be an adjustment period for these two.

Abigail will still have to cope with her inner demons. She won’t be quite the same woman she once was. Likewise, Chad’s pain could lead him down a dark path. Abigail may not like who Chad has become. Chad and Abby will have to do some serious work to rebuild their marriage.

Nevertheless, many Days of Our Lives fans are hopeful that “Chabby” can overcome the obstacles. They have a beautiful love story and it should be interesting to see how things turn out for them. We’ll give you updates as details emerge. Stay tuned to DOOL and don’t forget to check CDL often for the latest Days of Our Lives spoilers, updates and news.