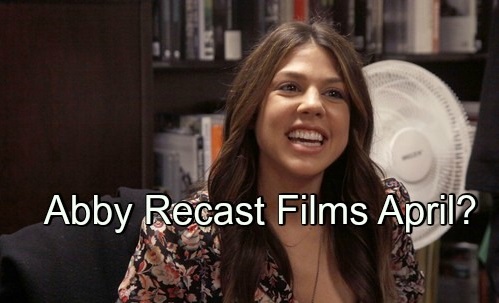 “Days of Our Lives” spoilers tease that DOOL fans will soon bid Kate Mansi farewell as she exits the role of Abigail. Mansi left the show several months ago, but the taping schedule will allow Abigail to remain on air through late May or early June. Nevertheless, the departure has been a major blow for “Days.”

In fact, it appears the search for a new Abigail may still be in progress. A casting call went out for a character named “Val,” but the description sounded incredibly similar to Abigail.

A couple of months later, the same casting call was slightly altered and released again. This time the show requested very strong actors. They didn’t want any repeat auditions either.

It’s doubtful that “Days of Our Lives” was being that picky over a brand-new part. Those casting calls were most likely for Abigail. The show sometimes disguises major roles, especially when the current performer is still airing.

Finally, another casting call confirmed that the hunt for a new Abigail is underway. Perhaps they decided they might attract better performers by ditching the deception.

According to Soap Opera Digest, “Days” is hoping to find the perfect fit during the latest hiatus. With any luck, the new Abigail will begin filming at the end of April.

Of course, we have to take this extended hiatus into consideration. When “Days of Our Lives” secured a renewal, they were asked to slow down the production model. The Olympics are also coming up, which means DOOL won’t be on the air for two weeks in August.

They had already managed to get six months ahead, so it was time to put on the brakes.

Jason47’s “Days” website notes that the current five-week dark period is the longest in the show’s history. Since they’re tweaking things behind the scenes, the actual debut date for the new Abby could vary. However, we should see another version of Abigail by this fall at the latest. That’s great news for “Chabby” fans!

Most of us will miss Kate Mansi, but it would be a shame to let this epic love story go to waste. Chad (Billy Flynn) will be anxiously awaiting his beautiful wife’s return. Will this new Abigail provide the same magnificent chemistry? It’s tough to say, but we sure hope so!

Out of respect for Mansi, DOOL may choose to wait until her last scenes have aired before they start promoting her replacement. Then again, you never really know what info will leak in the soap biz.

We’ll give you updates if we hear anything about the lucky lady. This performer will certainly have big shoes to fill. Stick with “Days of Our Lives” to see Abigail’s fresh look.

So “Days” fans, what do you think about this lengthy search for the new Abigail? Will the hard work pay off? Will you accept someone else in the role?