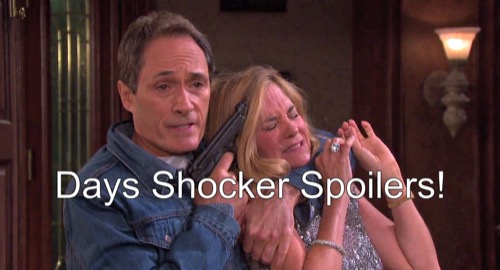 Days of Our Lives (DOOL) spoilers tease that big trouble is brewing in Salem. When the NBC soap returns from its current hiatus, you can expect plenty of jaw-dropping moments. Days recently released a post-Olympics preview to give us a taste of what lies ahead.

We’ll start off with some good news. Days of Our Lives spoilers reveal that Brady (Eric Martsolf) and Theresa (Jen Lilley) will finally get their son back. “Tater Tot” has missed his parents, but he’ll be found unharmed. Once they bring Tate back to Salem, Victor (John Aniston) will be arrested for conspiracy to kidnap Tate.

Of course, we don’t know the whole story here. Caroline’s (Peggy McCay) vision certainly pointed the finger at Victor, but he may not be as guilty as we think. Sonny (Freddie Smith) will accuse Deimos (Vincent Irizarry) of setting Victor up, but that may not be the case either. It seems there are still mysteries to uncover.

Elsewhere, Aiden’s (Daniel Cosgrove) new job will put him in a position of power. He’s the district attorney now and he intends on using that role to his advantage. Aiden even try to force a confession out of Hope (Kristian Alfonso). She may not get away with Stefano’s (Joseph Mascolo) after all.

Other Days of Our Lives spoilers say Kayla’s (Mary Beth Evans) life will hang in the balance as she faces a medical crisis. Kayla will likely need surgery for her subdural hematoma, but there will definitely be some risks. Steve (Stephen Nichols) and Joey (James Lastovic) will be terrified as they await updates on Kayla’s condition.

In the meantime, Philip (John-Paul Lavoisier) will try to solve a problem for Chloe (Nadia Bjorlin). He’ll insist that Chloe will need someone to pose as her baby’s father if she’s going to keep it. DOOL spoilers say Philip will think he’d be the most believable choice.

Unfortunately, Nicole (Arianne Zucker) will have a hunch that Chloe is keeping Deimos in the dark about his kid. She’ll confront Chloe and ask if this is actually Deimos’ baby. Will Chloe come clean? Stick with Days of Our Lives to see what Chloe’s plans are.

Finally, we have the promo’s biggest revelation. Days is about to give us not one, not two, but three villainous returns! Clyde (James Read) will soon team up with Xander (Paul Telfer) and Orpheus (George Del Hoyo). If you’re wondering, Orpheus is a baddie from back in the ‘80s. These criminals will put their heads together and concoct an escape strategy.

After they pull off their prison break, they’ll split up to get personal vengeance. Xander will grip Theresa by the throat as she prepares for her nuptials. Meanwhile, Orpheus will grab Eve (Kassie DePaiva) and hold her at gunpoint while the wedding guests look on in shock. He’ll eventually state that everyone there needs to die.

As for our rascally Clyde, he’ll have a bone to pick with Kate (Lauren Koslow). DOOL fans have lots to look forward to after the Olympics conclude. Tune in starting August 22 and don’t forget to check CDL often for the latest Days of Our Lives spoilers, updates and news.