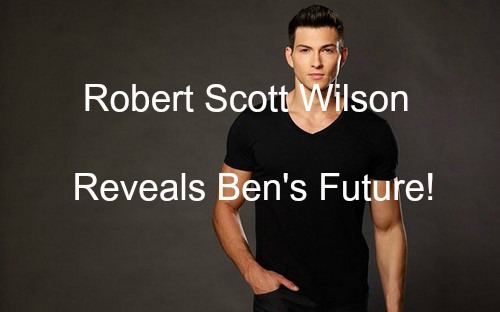 “Days of Our Lives” spoilers reveal that Ben’s (Robert Scott Wilson) saga may have a chapter left to be told. Ben took DOOL fans on a wild ride throughout his time on the NBC soap. Wilson last aired on December 8, but many “Days” viewers are already missing his explosive scenes as a coldhearted killer.

Fortunately, it seems there’s more to come from Ben. In an interview with Soap Opera Digest, Wilson teased that Chad (Billy Flynn) and Abigail (Kate Mansi) may not be rid of the nutjob just yet. Wilson talked about how this haunting experience could remain on Abigail’s mind down the road.

“You can’t shake it off just because someone goes to jail,” Wilson said. “Because of that, there may be some presence of Ben along the way.” Maybe Abigail will have nightmares or horrific visions of Ben in the future.

Of course, there’s a possibility that Ben could pop up as a ghost if he gets killed in the clinker. Clyde (James Read) once had a man murdered in prison to protect his son’s involvement in a gambling ring. Ben could certainly encounter some enemies that would want to end his life.

We should consider the fact that Ben killed four people, including young Paige (True O’Brien). Murdering a college student who had her whole life ahead of her was pretty low. Even criminals have standards. There are often cases where other jailbirds make sure justice is properly served.

Then again, “Days of Our Lives” may want to keep Ben alive and well in case they ever want to do a prison break storyline. Perhaps Ben will return for revenge on Chad and Abigail someday. The jury is still out on Ben’s true mental state, but he could always snap back to reality. When Ben learns that Abigail’s baby wasn’t his after all, things could get ugly!

Nevertheless, no one should worry about Wilson finding work. He recently finished filming a new movie called “I Know Where Lizzie Is.” The movie also stars Nadia Bjorlin, who plays Chloe on DOOL. The pair didn’t know each other beforehand, but Wilson recognized Bjorlin from the show at the table read. It looks like a lot of “Days of Our Lives” actors are finding success outside of the soap biz.

Wilson is working on another movie, “Father,” which is a drama that features a star-studded cast. With such great talent and an impressive acting reel, Wilson should go far in the film and television industry. Keep an eye out for news and updates on Wilson’s upcoming projects.

So “Days” fans, what do you think about Robert Scott Wilson’s teaser on Ben’s potential return? How exactly will Ben’s “presence” come into play? Could we see Ben in a dream or as a ghost? Are you happy to see that Wilson is already landing new roles?