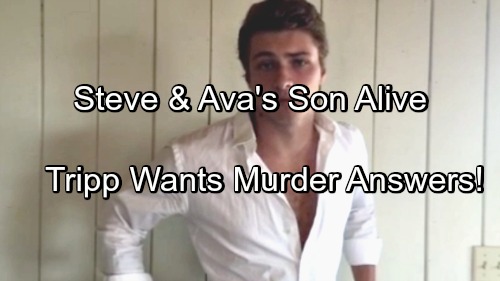 Days of Our Lives (DOOL) spoilers tease that Ava (Tamara Braun) may be gone, but she won’t be forgotten. Joey (James Lastovic) has certainly been dealing with guilt over his murderous actions. Kayla (Mary Beth Evans) pushed Joey to get some therapy. His sessions will eventually help him cope.

Steve (Stephen Nichols), Kayla and Joey will face other hurdles pretty soon. After Orpheus (George DelHoyo) breaks out of prison and returns to Salem, Kayla and the Johnson men will get caught in the drama. Kayla’s upcoming medical crisis is another obstacle this family will have to overcome.

Once all of that wraps up, Steve and Kayla will move toward an official reunion. They deserve some peace after everything they’ve been through. Unfortunately, they aren’t going to get it. Remember Steve and Ava’s journey to find their long-lost child? It ended in heartbreak when they learned their baby died early on.

Of course, when is anyone ever truly dead on DOOL? Days of Our Lives spoilers hint that Steve and Ava’s son may be alive after all. This would definitely turn Steve’s world upside down.

Although nothing has been confirmed, an audition tape recently surfaced for the part of “Tripp.” In the clip, the actor’s dialogue indicates that this young man is the product of Ava and Steve’s romance. He seems to resent his father, but Kayla does her best to show him kindness.

Tripp is a bit of a troublemaker as well. The scene notes that Kayla paid Tripp’s bail after he was charged with assault and battery. Tripp claims some guy was hassling Claire (Olivia Rose Keegan), which suggests that this character will get to know other Salemites. That might mean Tripp will be sticking around for a while.

Another hint this tape offered is about Ava’s murder. It sounds like Tripp won’t buy the story the ISA tried to sell. In fact, Tripp won’t even believe Steve was involved at all. Tripp will demand to know who really killed his mother. He’ll surely find out the truth sooner or later. When Tripp hears the news that it was his half-brother, Joey had better watch out!

We should point out that Days audition tapes sometimes vary from what actually plays out on screen. Names can be changed and plots occasionally go in different directions. This is obviously just a rough draft of what’s ahead.

Still, the information in Tripp’s clip sounds crucial to the storyline. It’s tough to believe they’d deviate too much from this plan. It’s also worth mentioning that Dena Higley, one of the head writers at Days, has always been a fan of Ava’s character. It makes sense that she’d want to carry on Ava’s legacy through her kid.

Days of Our Lives viewers will be anxious to see how this unfolds. Due to the taping schedule, Tripp probably won’t pop up for several months. We’ll give you updates as more details emerge. Stay tuned to DOOL and don’t forget to check CDL often for the latest Days of Our Lives spoilers, updates.