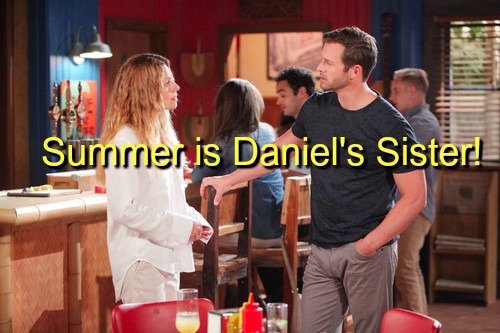 “Days of Our Lives” spoilers for Tuesday, February 23, tease that Brady (Eric Martsolf) will be shocked by Summer’s (Marie Wilson) revelation. Summer will disclose her connection to Daniel (Shawn Christian), but it could create more questions than answers for Brady. We don’t know for sure what’s in store, but some DOOL buzz that suggests Summer might be Daniel’s sister.

Longtime “Days” fans know that Daniel was conceived after Maggie’s (Suzanne Rogers) eggs were stolen. Daniel found out years later that Maggie was his biological mother. It’s possible that Summer was also conceived using that same batch of eggs. However, Summer may not be aware of the whole story. That sounds like a bombshell that might come later.

Nevertheless, Summer knows the gist of her link to Daniel and Brady will press her to learn the details. On Wednesday, Brady will encourage Summer to come to Salem so they can figure all of this out. “Days of Our Lives” spoilers say Summer will eventually agree to the idea, but her arrival may stir up trouble for several Salemites.

Meanwhile, the police will decide they have enough evidence to make an arrest in the case of Stefano’s (Joseph Mascolo) murder. Andre (Thaao Penghlis) will soon be behind bars. Fortunately, Andre will find a way to wiggle out of this down the road. DiMeras never stay locked up for very long.

Elsewhere, Ava (Tamara Braun) will make one last attempt to take Kayla (Mary Beth Evans) down. DOOL viewers have watched Ava try scheme after scheme to make Kayla’s life miserable. For the most part, Ava’s efforts have succeeded. Still, Ava isn’t content to leave town without getting the ultimate revenge. She’s going for the gold this time.

“Days of Our Lives” spoilers indicate that Ava will want Kayla to look like a killer. She’ll form another elaborate plot and quickly put it into action. Ava will stab herself with a hypodermic needle, but Kayla will end up saving her life. Kayla may regret that decision once Ava turns the tables. Stick with the NBC soap to watch Ava awaken and accuse Kayla of attempted murder.

So “Days” fans, what do you think about Summer’s updates on her ties to Daniel? Will Summer be revealed as Daniel’s sister or is there another connection? How will Andre manage to get out of his jam? Will Ava’s desperation lead to bad news for Kayla? Voice your opinion in the comments below and don’t forget to check CDL often for the latest “Days of Our Lives” spoilers, updates and news.