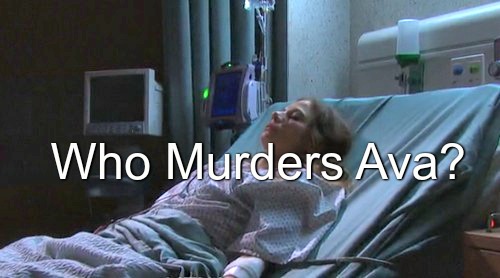 “Days of Our Lives” spoilers for the week of February 22-26 tease that Ava (Tamara Braun) will cause even more chaos. Kayla (Mary Beth Evans) will be goaded into delivering an epic punch to Ava’s face. After everything Ava put Steve (Stephen Nichols) and Kayla through, no one would deny that she deserves a strong whack. You could call it payback for the whole candlestick incident.

Before things escalate any further, Roman (Josh Taylor) and JJ (Casey Moss) will arrive to break up the brawl. However, a decent clobbering won’t deter Ava from her evil plan. She’ll sneak in Steve and Kayla’s house to stage a crime scene.

SEE Ben Escapes from Asylum – Chad’s Loved Ones in Danger!

Ava will stab herself with the hypodermic needle she ordered. A short time later, Kayla will show up and attempt to revive Ava. That might be the least believable part of this story. You’d think Kayla would let Ava fade away, but it seems she just won’t feel right about it. Kayla has a good heart, but her heroic actions won’t be met with gratitude.

When Ava wakes up, “Days of Our Lives” spoilers say she’ll accuse Kayla of trying to murder her. By the end of the week, Ava’s words could come back to haunt her. DOOL’s weekly preview video shows Ava flatlining in the hospital. It appears someone will slip in when no one else is around. He or she might choose to inject Ava with something lethal.

This storyline is becoming a real whodunit. The promo offers Steve, Kayla and Joey (James Lastovic) as prime suspects. Joey has a bit of a rebellious side and he would definitely enjoy getting revenge on Ava. If Joey does the deed, there’s a chance that Steve or Kayla might try to take the rap. That would likely be the soapiest route “Days” could take.

Of course, we can’t count out Kayla or Steve either. After Ava gave Kayla the sex video, Steve sent Ava a text that said she was a dead woman. Perhaps Steve will decide to make that statement true. As for Kayla, maybe she’ll choose to put her morals aside.

Ava obviously won’t appreciate Kayla’s efforts to save her, so Kayla might respond by getting rid of her enemy once and for all.

Then again, there could be some sort of twist in the works that will exonerate all of them. Now that Ava knows her child is dead and Steve hates her guts, she might feel she has nothing left to live for. For all we know, this could be Ava’s final act of vengeance before she heads off to the great beyond.

In other words, Ava could manage to kill herself and frame Kayla in the process. DOOL viewers will be anxious to see how all of this gets sorted out. Stick with “Days of Our Lives” for updates on the continued madness.

So “Days” fans, what do you think about the news that Ava is this week’s shocking murder? Which character will be behind Ava’s death? Could there be another explanation? Voice your opinion in the comments below and don’t forget to check CDL often for the latest “Days of Our Lives” spoilers, updates and news.