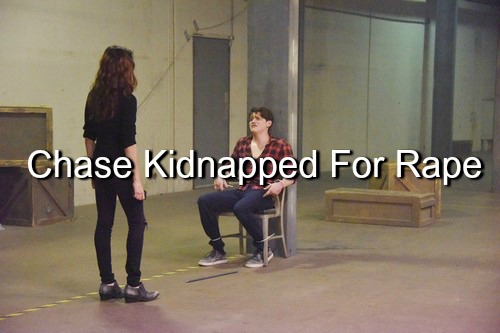 “Days of Our Lives” spoilers for the Wednesday, March 9, episode tease that Ciara (Vivian Jovanni) will get some support from her friends. Claire (Olivia Rose Keegan) promised Ciara that she wouldn’t tell anyone Chase (Jonathon McClendon) raped her. However, it looks like Joey (James Lastovic) and Theo (Kyler Pettis) will know that something’s up.

Even if they don’t realize quite how far Chase went, they won’t appreciate the way he hurt Ciara. DOOL spoilers say Theo and Joey will unleash their wrath on Chase by tying him up in a warehouse. Chase will be at their mercy once he’s bound and placed where no one can hear his cries for help. Joey has a tendency to take justice into his own hands and Theo will certainly back him up in this case.

Days of Our Lives spoilers tease that Victor (John Aniston) will get alarming news. “Days” viewers know that Philip (John-Paul Lavoiser) delivered the formula to Deimos (Vincent Irizarry) and it has now been handed over to Petrov (Mark Laursen). Whether it was real or fake, Philip is going to be in big trouble.

This was probably part of Philip’s plan to gain Deimos’ trust, but Victor may take it as another sign of betrayal. Regardless, it’s clear that Victor won’t be pleased by his son’s idiotic move. Stay tuned to watch Philip pay the price for his mistake.

Other “Days of Our Lives” spoilers reveal that Belle (Martha Madison) and Shawn (Brandon Beemer) will have a heated confrontation. Belle recently purchased a club for Claire to sing in, but Shawn won’t approve of the idea. He’ll likely feel it’s inappropriate for Claire to be hanging around the club’s riffraff. Besides, Shawn doesn’t want Belle to use dirty DiMera money on things for their daughter.

Belle will contend that it’s her money now and she can do whatever she wants with it. There doesn’t seem to be anything that Shawn and Belle agree on at the moment. Days spoilers indicate that they’ll have another tiff next week. The conflict just keeps coming for these two.

Will Belle and Shawn continue to quarrel or could they eventually work through their issues? We’ll have to wait and see, but learning to be civil would be a step in the right direction. Who knows? It might even set up a reconciliation down the road. Stick with “Days of Our Lives” for updates on this strained relationship.

So “Days” fans, what do you think about the news that Chase will face consequences for what he did to Ciara? Will Victor take Philip down? Will Belle and Shawn ever get along? Voice your opinion in the comments below and don’t forget to check CDL often for the latest “Days of Our Lives” spoilers, updates and news.