‘Days of Our Lives’ Spoilers: Theresa Attacks Summer, Demands to Know Where Tate Is – Summer Threatens to Kill Theresa 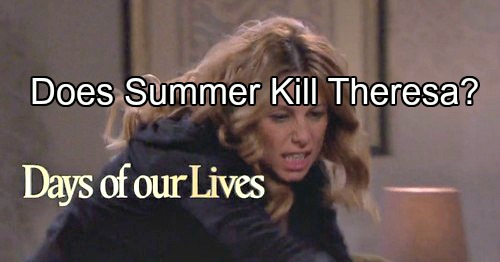 Days of Our Lives (DOOL) spoilers for the week of July 25-29 reveal that we’ll see some joyous reunions. Paul (Christopher Sean) will be surprised when he runs into Sonny (Freddie Smith) at Club TBD. Sonny will flash a grin and explain that he’s sticking around. Salem is home.

Days spoilers tease that Adrienne (Judi Evans) will also be thrilled to see her son. Justin (Wally Kurth) will have a chance to catch up with Sonny, too. Even though Justin and Adrienne aren’t a couple anymore, they’ll want to spend some time together as a family.

It should be nice to see Sonny interacting with his loved ones again. Unfortunately, another reunion won’t be transpiring this week. The mystery of Tate’s kidnapping is becoming increasingly muddled. They’re making a little progress, but the clock is ticking.

Statistics are not on Brady (Eric Martolf) and Theresa’s (Jen Lilley) side. With every passing day, it becomes less likely that they’ll find their “Tater Tot.” Theresa is quite close to an emotional breakdown. 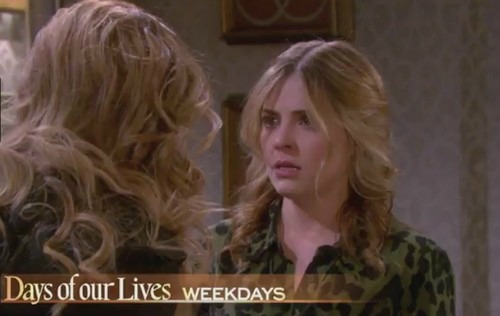 Days viewers know that Marlena (Deidre Hall) tried to help Theresa remember more about what happened when Tate was snatched. She did some sort of mild hypnosis to pull out any memories that Theresa might have from that day. Theresa was drugged and out of it at the time, but she recalled a shadowy figure lurking near the trees.

However, Theresa couldn’t tell if it was a man or woman. She couldn’t get a good look at the person’s face either. All Theresa knows is he or she was wearing dark clothes and a hat. That’s not a lot to go on, but Theresa is grasping at any clue she can get.

Days of Our Lives spoilers indicate that Theresa will have a dream that clears up some of her questions. Could Theresa see the person who swiped her child? Will Theresa will realize that Summer (Marie Wilson) actually did the snatching?

Summer claims she didn’t take Tate, but we can’t trust her. There was obviously some sort of deal that went down. If Summer didn’t hand over Tate, then what did she hand over? Regardless, Theresa will feel certain that Summer had something to do with Tate’s abduction.

DOOL’s weekly preview video shows Theresa attacking Summer in her hotel room. They’ll wrestle until Theresa flings Summer on the bed. Days of Our Lives spoilers say Theresa will demand answers. She’ll insist that Summer is going to tell her where her son is…NOW! 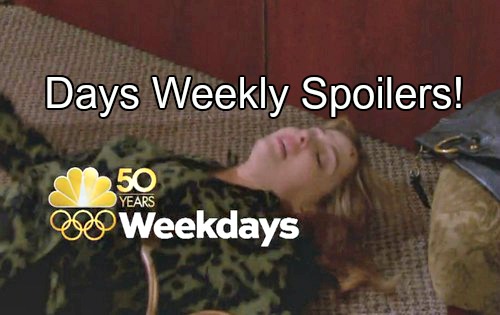 Summer will move in close with a menacing glare. As Theresa gapes, Summer will state that she’ll kill her – presumably if Theresa tells the cops that Summer lied. Summer will end up shoving Theresa away and she’ll hit her head as she falls to the floor. Gee, this sounds awfully familiar. Remember Clark’s (Josh Burrow) incident?

Luckily, we know Theresa will remain on the air for several months. She’ll survive this scuffle, but Summer could pay the price. Will Summer secure a spot in prison? People will probably accuse Summer of murdering Clark after this encounter. No one can believe anything that comes out of Summer’s mouth anymore.

We’ll give you updates as more news emerges on Summer’s final airdate. It’s coming up pretty soon. Stay tuned to DOOL and don’t forget to check CDL often for the latest Days of Our Lives spoilers, updates and news.