‘Days of Our Lives’ Spoilers: Theresa’s Exit Storyline Triggered By A Death, Who Dies? 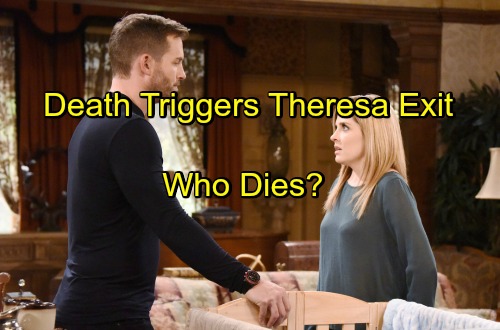 Days of Our Lives (DOOL) spoilers tease that some big changes are coming to Theresa’s (Jen Lilley) life. After Jen Lilley finished filming a few months ago, speculation immediately began about Theresa’s exit. Days is remaining tight-lipped, but let’s look at what we know and try to figure out where things are headed.

Theresa is facing some major turmoil right now thanks to Xander (Paul Telfer). Orpheus (George DelHoyo) and Clyde (James Read) are on the same team, so they could pose a risk as well. The villains will continue to wreak havoc for a couple of months. That means they could wrap up their time in Salem shortly before Theresa’s exit in November.

We also know that Theresa’s exit storyline will be a real tearjerker. Nothing can lead to waterworks like someone dying. The St. Luke’s set will return this fall, so a funeral is a possibility. Father Louis (Larry Poindexter) shot some scenes there with Kim (Patsy Pease) and Shane (Charles Shaughnessy).

Since Theresa’s parents are going to be around, something huge has to happen. They wouldn’t make the trip for just anything. Eve (Kassie DePaiva) is set to depart this week, but she’ll be back for Theresa’s exit in November.

In interviews and on social media, Lilley has stated that DOOL left it open for a return. After all, it’s common for cast members to leave the show only to make a comeback later. If Days of Our Lives really did create that option for Lilley, it sounds like Theresa might make it out of Salem alive.

Lilley recently tweeted that she was running lines with Meredith Scott Lynn (Anne). Perhaps Lilley has already taped a brief return. As for the initial exit, there are still questions to consider.

What can Days do about Tate? It’s hard to imagine Theresa abandoning her son or moving him away from Brady (Eric Martsolf). Could Tate be the one who gets killed off? It would certainly provide the teary exit that Lilley has been teasing. That would explain all of the family visits and church scenes.

If they go in that direction, Theresa could be so distraught that she has to leave town. The memories of Tate might be too much to bear. It’s worth mentioning that Days of Our Lives has a cancer storyline in the works. It’s possible that Theresa or Tate could be diagnosed and be sent elsewhere for treatment.

However, they’ve already laid the groundwork for a cancer storyline with Adrienne (Judi Evans). Plus, it would be weird for Brady and Theresa to have to deal with that situation while three villains are on the loose. A deadly attack or accident makes more sense.

Days of Our Lives spoilers suggest that Brady and Theresa will face a crushing blow this week. That could be about Tate, but it might be a bit too early. Theresa’s confession is another possibility. Brady still doesn’t know that Theresa lied about Xander’s attempted rape. You can bet that Theresa will struggle with guilt if Xander’s wrath leads to Tate’s death down the road.

We can confirm that Theresa and Brady will part ways on good terms when she ends her run. That’s a bright spot in the midst of the sadness! We’ll give you updates as more news comes in. Stay tuned to DOOL and don’t forget to check CDL often for the latest Days of Our Lives spoilers, updates and news.

Anyone have the heart to tell @billymflynn that he’s not a cat? 🐱 #DAYS https://t.co/40ionDCCfG pic.twitter.com/pNfrjmfSVr