Days of Our Lives (DOOL) Spoilers: Week of February 1 – Steve Sleeps with Ava, Learns Their Child is Dead? 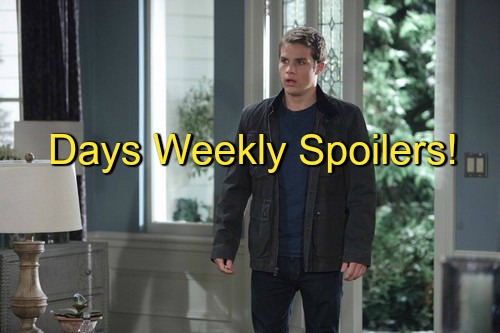 “Days of Our Lives” spoilers for the week of February 1-5 tease that Steve (Stephen Nichols) will get caught in a sticky situation. Ava (Tamara Braun) is holding Kayla (Mary Beth Evans) hostage somewhere and Steve is desperate to bring her home. Alas, Steve won’t like what he has to do to get Kayla back.

DOOL viewers know that Ava will only provide Kayla’s location if Steve helps her find their child. Steve thinks that’s a crummy deal. He doesn’t want to leave Kayla locked up while he’s off on a wild goose chase.

As a result, “Days” spoilers say Steve will act like he’s in love with Ava. If Steve can make Ava believe she’s “the one,” then maybe she’ll agree to release Kayla. At least it’s worth a shot. However, Joey (James Lastovic) will cause a snag in Steve’s plan.

After Joey walks in on them making out, he’ll storm off. Steve will follow him and offer an explanation. Unfortunately, Ava will start to realize that Steve is just trying to trick her. Steve will do his best to stay on course with this scheme, but it will eventually backfire. Ava will insist that Steve needs to prove his love. It looks like a peck on the lips isn’t going to cut it.

DOOL’s weekly preview video shows Ava stripping down to some sexy lingerie. Ava will suggest that Steve knows what he has to do to secure Kayla’s freedom. Ava will point out that she holds Kayla’s life in her hands. As she pulls Steve closer, Ava will whisper that he should stop fighting this.

“Days of Our Lives” spoilers indicate that Steve will decide he has no choice but to cave in. He’ll have to sleep with the enemy if he ever wants to reunite with “Sweetness.” Ava will be thrilled to make love with the man she’s been longing for. That joy could soon turn to heartbreak when Steve and Ava receive upsetting news that involves their child.

Perhaps the son Ava wants to find is dead. Then again, maybe all of this was a lie and Ava just wants to bond with Steve over a fake loss. Whatever the case, things are about to get very complicated for Steve. Stick with “Days of Our Lives” for updates on the drama headed Steve’s way.

So “Days” fans, what do you think about Ava’s new demand? Are you surprised that Steve will agree to have sex with Ava? Will Kayla be crushed when she learns they did the deed? Voice your opinion in the comments below and don’t forget to check CDL often for the latest “Days of Our Lives” spoilers, updates and news.