‘Days of Our Lives’ Spoilers: Week of June 20 – Shocking Confessions, Heartbreak and a Daring Escape 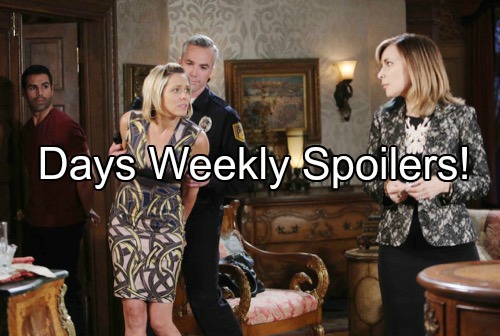 Days of Our Lives (DOOL) spoilers for the week of June 20 ease that we’re in for generous doses of heartbreak and shocking moments on next week’s new episodes. For starters, Nicole (Arianne Zucker) will try to get herself out of trouble.

She just got caught breaking and entering after searching through the Kiriakis mansion with Dario (Jordi Vilasuso).

Belle (Martha Madison) will be furious with her client for creating more problems, but Nicole will insist that she was desperate to prove her innocence. DOOL spoilers say Nicole will maintain that Kate (Lauren Koslow) is the one who deserves to be locked up.

Stay tuned to see if Nicole can get anyone besides Dario in her corner.

Later, Days of Our Lives spoilers indicate that Belle and Shawn (Brandon Beemer) will share some good news with Claire (Olivia Rose Keegan). They’ll announce that they’ve decided to give their relationship another shot. Claire will be thrilled to learn her parents are getting back together.

Unfortunately, Theo (Kyler Pettis) won’t be feeling quite as joyous this week. He’ll reach out to Ciara (Vivian Jovanni), but she’ll quickly push him away. Ciara is trying to ignore her feelings for Chad (Billy Flynn), but it’s not really working out.

Of course, Chad will be much too wrapped up in Abigail’s (Kate Mansi) drama to notice his nanny’s crush. He’ll grow concerned about leaving Abigail at Shady Hills. Abby will beg Chad to take her home, but Dr. Robinson (Anne-Marie Johnson) will refuse to release her.

Days spoilers say Chad will wonder if breaking Abigail out might be the only solution.

It just means Abby will carry on in spite of any off screen visions that she’s forced to deal with.

Abigail will hope that she can turn her life around and she’ll make a bold move to change her circumstances. DOOL viewers will want to check out Abby’s escape on Friday, June 24. This will mark Kate Mansi’s final day as Abigail.

Back in Salem, Paul (Christopher Sean) will find another way to spend time with his dad. John (Drake Hogestyn) will offer Paul a job at Black Patch, the private investigation firm he started with Steve (Stephen Nichols). Paul will happily accept and get started on this new career path.

At the police station, Days spoilers hint that a mysterious stranger will raise questions. When a man named Monahan arrives to make a confession, Rafe (Galen Gering) will be thrown for a loop.

Roman (Josh Taylor) and Rafe will both worry that their cover-up plan is in jeopardy when Monahan claims he killed Stefano (Joseph Mascolo).

Andre (Thaao Penghlis) has obviously had his grubby paws all over this. There’s a good chance Aiden (Daniel Cosgrove) was Andre’s secret helper. Days of Our Lives spoilers reveal that more chaos lies ahead.

We’ll give you updates on the hottest plots. Stay tuned and don’t forget to check CDL often for the latest Days of Our Lives spoilers, updates and news.