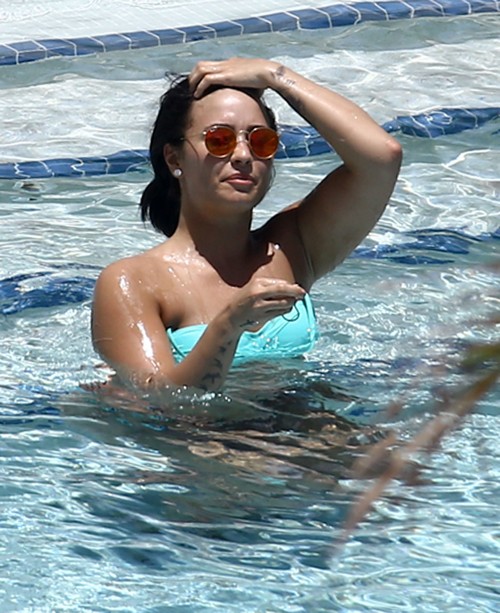 Demi Lovato is over Wilmer Valderrama or so it seems. Looks like Demi is dating UFC’s Luke Rockhold and enjoying a secret summer romance. TMZ sources report that Demi and Luke met sometime in early 2016 at a Los Angeles gym and the singer and the UFC star got a little bit friendly. Was this about the time Wilmer allegedly thought Demi was cheating on him with Nick Jonas?

In June Wilmer and Demi issued a statement that the couple had ended their relationship after “almost 6 loving and wonderful years together.” In the statement Wilmer and Demi revealed the decision to call it quits was very difficult and that they were better off as best friends.

You would think that after nearly six years Wilmer Valderrama would have asked Demi to marry him. But that proposal never came.

Both Demi and Wilmer were struggling on and off with sobriety during their relationship. Maybe that’s why Wilmer never proposed. Or if he did Demi didn’t accept it because she got clean and sober and Wilmer hadn’t.

After the breakup Demi was allegedly dating singer Bruno Mars when ‘Uptown Funk’ contacted Demi’s PR people to discuss the possibility that Demi and Bruno might collaborate on a song.

Reportedly Bruno Mars used the collaboration as an excuse to get to know Demi better in hopes of a romance. Another guy who came into Demi’s life after Wilmer Valderrama was Odell Beckham, Jr. when the singer and the NY Giants wide receiver were spotted on a date.

After a long-term relationship with an actor, a reported flirtation with Nick Jonas and Bruno Mars and a date, maybe two, with a pro football player, is Demi Lovato dating Luke Rockhold?

TMZ sources revealed that this actual romance stated not long ago. Reports say there have been some secret messages exchanged between Demi Lovato and Luke Rockhold via social media. Something involving smiley faces on the singer and the athlete’s fingers.

Demi Lovato and Luke Rockhold make a gorgeous couple. After all that Demi has struggled with in her young life she deserves to find a great guy to love her. Maybe Luke is that guy?