Designated Survivor Recap – Time Will Save You: Season 1 Episode 2 “The First Day” 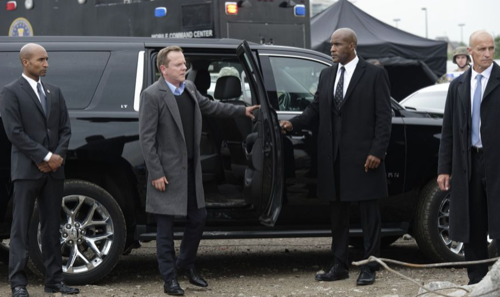 Did you watch last week’s Designated Survivor premiere where Kirkman (Kiefer Sutherland) struggled to keep the country and his own family from falling apart while navigating the highly volatile political arena?  If you missed the episode we have a full and detailed Designated Survivor recap, right here.

On tonight’s Designated Survivor as per the ABC synopsis, “Kiefer Sutherland stars as Tom Kirkman In this dramatic thriller, Kirkman will struggle to keep the country and his own family from falling apart, while navigating the highly volatile political arena and while leading the search to find who is responsible for the attack.”

The FBI are heightening security in every location following the discovery of bombs in the rubble in last week’s episode.

President Kirkman is making his first address to the nation. News reports call Kirkman’s speech ineffective in the wake of the attacks.

He watches the coverage before making his way to the West Wing as everyone stares at him as he passes by. He has a briefing in the Oval Office. Planes and trains are on lockdown. They are looking at groups that have the ability to bring explosives into the capitol. Chaos breaks out as everyone disagrees on a strategy. Kirkman leaves the room unnoticed. He hides away in another room, telling secret service to give him a moment. A large desk he sees a placard with his title on the chair and one for the president. He chuckles at the irony of the situation.

He commands his assistants Emily and to help him put together a cabinet and to keep him up to speed on what is happening out there.

Meanwhile, Kirkman’s speech writer Seth is making his way down the street with a backpack. The police stop him on foot and question him about what is in his bag. He shows ID and they let him go.

Kirkman meets with Seth. The president wants to apologize to him for writing a speech he delivered ineffectively. News reports interrupt them with stories of police locking down on Muslim neighborhoods. Kirkman finds out that the Governor has handed those orders and he isn’t backing down from the president who disagrees with his approach.

Kirkman has 175 personal phone calls and a congresswoman who he discovers is also a designated survivor. Kirkman sits with her, sharing his doubt in his leadership. She is determined to get through this just like they did when 9/11 happened. She wants him to make it his house and lead the way as he sees fit.

Kirkman’s assistants hunt for cabinet members, arguing the whole time. Kirkman and his wife talk about the Governor’s lack of respect. They are interrupted with word that it was Al-Sakar who blew up the capitol. His men are 75% confident that it was Al-Sakar.

The president and Alex get ready to go to the capitol with Kevlar vests on. Alex is breaking down she is so nervous. Kirkman asks the secret service agent what his code name was when he was in charge of HUD – “glasses, sir.”

They arrive to see all of the rumble, the clean-up crew, and the cameras. It is a surreal sight. Kirkman talks with the deputy director. Kirkman takes the vest off, he wants to protect confidence.

At the White House, Penny is watching her dad on TV at the capitol. Kirkman takes a megaphone and thanks the men and women who are cleaning up the rubble. He observes their dedication. Meanwhile, the crowd takes notice of their phones, alerted by breaking reports of a Muslim teen beaten by police in Michigan. Some of the crowd grows angry, a scuffle breaks out and Kirkman is rushed off.

The deputy is upset that Agent Wells has given him all the facts. He will tell Kirkman about her theory if she can prove it.

Kirkman wants to know what he can do to make the Governor stand down. Every order he could put into effect will how he appears to the public. Alex is angry at Leo for leaving Penny alone to see her father on TV.

The general and Aaron are still in cahoots, discussing how they can get rid of Kirkman. Alex tries to help her husband find a solution to the Michigan problem. A call comes in, the boy from Michigan just died.

Kirkman asks his assistant for the number of the Michigan boy’s parents. Sitting in a dark room with the TV on mute, Kirkman makes the call, apologizing while getting emotional.

Kirkman returns to the capitol to shake hands in the dark of the night, thanking everyone for their service.

In the makeshift FBI tent, we see who Agent Wells longs to see in the form of a picture on a missing persons board. She is alerted to news that there is a survivor in the rubble.