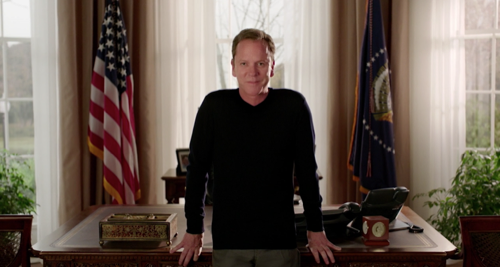 Tonight on ABC their new conspiracy thriller Designated Survivor premieres with an all-new Wednesday, September 21, 2016, episode and we have your Designated Survivor recap below.  On tonight’s Designated Survivor series premiere, Tom Kirkman, a lower level United States Cabinet member, finds himself suddenly appointed president of the country after a catastrophic attack kills everyone above him in the line of succession.

On tonight’s Designated Survivor series premiere as per the ABC synopsis, “Kiefer Sutherland stars as Tom Kirkman In this dramatic thriller, Kirkman will struggle to keep the country and his own family from falling apart, while navigating the highly volatile political arena and while leading the search to find who is responsible for the attack.”

This is a new series that we are extremely excited about who doesn’t love Kiefer Sutherland?  So make sure to come back to this spot between 10PM – 11PM ET for our Designated Survivor recap.  While you wait for our recap make sure to check out all our TV recaps, spoilers, news & more!

Secretary of State Tom Kirkman and his wife, Alex, are in Washington trying to talk their daughter into going to bed over the phone. She wants to know when they are coming home. They sit back and relax to watch TV. It goes fuzzy. The Secret Service come in. Kirkman goes to the window to see explosions happening outside.

Earlier that morning, Tom makes breakfast for his family. His son isn’t thrilled. He’s a bad cook. Tom wants him to come home after school to watch his sister, he has the State of the Union to attend. Tom heads to work. He is talking to his assistant about the bug event.

Tom meets with a member of the cabinet, Charlie. Tom finds out behind closed doors that he will be offered an Ambassador Ship under the UN. Tom isn’t thrilled.

Tom’s wife, Alex, is angry. She wants him to fight against what is clearly a demotion. She doesn’t want to move the kids, Penny and Leo. Tom agrees. He is going to make this work.

Back to the present, Tom and Alex are being rushed to safety now that he is a designated survivor. The Capitol has been attacked with no word on the president or his detail. The Secret Service gets word that the Capitol and the Congress are gone, they have been killed, making Tom the president of the United States.

In a bar, onlookers watch the TV reports, the capital is burning with sirens in the background ringing out. An FBI agent gets into her car and leaves.

Tom and Alex are sworn in as the president and first lady. They are quickly separated with Tom going to service operations, a command center with dozens of people working on securing the situation. Tom asks that everyone take a moment for their fallen friends.

Tom wants to go around the table to meet everyone. No one is allowed to talk to the press. Tom’s head is spinning, he isn’t sure what to do. He runs to the bathroom and gets sick. A speech writer, Seth, is in the other stall. He doesn’t know that he’s talking to the new president, who he thinks needs to step aside. He calls Kirkman by the wrong name, Kirkland, calling him a follower, not a leader. They come face to face. Seth is embarrassed. He tells Seth he has 52 minutes to write a speech for the public.

The FBI is working with EMS who is digging through the rubble for survivors. They don’t know who is responsible yet for the explosions. They start moving on collecting evidence. The city is a disaster of ash, fire and rescue crews.

The speech writers are all upset that Kirkman has become the president. Meanwhile, Tom is trying to figure out how all of this happened. Alex also thinks it’s surreal. Penny is scared. Alex wonders if they should run, get out, now that they are a target. An agent interrupts them, Leo isn’t at his friend’s house. They need to track him down.

Tom meets Major Cameron, who teaches him where all of the nuclear weapons are located. All 3 pages of US enemies are denying responsibility.

Leo is busy clubbing and selling bags of drugs. After making an exchange, the Secret Service show up and take Leo in. They pinged his phone and found him. Leo wants to know where they are going, he thought he was headed home.

Emily Rose, Tom’s assistant, is trying to get to him but she isn’t on the list. Seth is going over the speech with Tom and Alex. Seth reminds him that he can’t be relaxed, he needs to be stronger than ever before. He is speaking to the world.

It looks like the Ukrainians are rushing to cut off the oil supply while the US is down on their luck and in turmoil.

Emily has made it through the gates and she wants to see Tom. She wants to be by his side when he needs her the most.

The General wants to do something to show force, to show US enemies that they are still strong even if they are down. Tom is against it. He doesn’t want to do anything just yet, even if the whole table is against him. He gives the General the go ahead to prep his bombers.

Leo tells Penny he is scared but their dad isn’t. Tom overhears this. FBI Agent Wells is on her cell, trying to find someone she loves. A bomb is discovered in the rubble. Everyone runs for cover as a bomb sniffing dog and an officer circle around it.

The bomb squad goes in, suited up, to remove the bomb as the FBI looks on. They clear the scene after it is determined to be a dud.

Tom meets with the Ukrainian ambassador, he wants them to pull their destroyers back.  He threatens to attack Iran if he doesn’t dock his destroyers. He means business and doesn’t want to get off on the wrong foot. Tom gives him 3 hours to pull back.

Some of the FBI thinks its ISIS while Agent Wells thinks otherwise. She thinks its someone, a group, who do not want to claim credit for the attacks because they have more planned.

Tom tells Alex that he has to do it. She tells him that she is always on his side.

Harry and the General meet to talk about how they can remove Tom. He isn’t experienced. The US is in a state of war, the General reminds him. They have to do something.

Seth brings Tom the speech and takes his glasses as he goes live to speak to the American public about the change in office and the attacks.