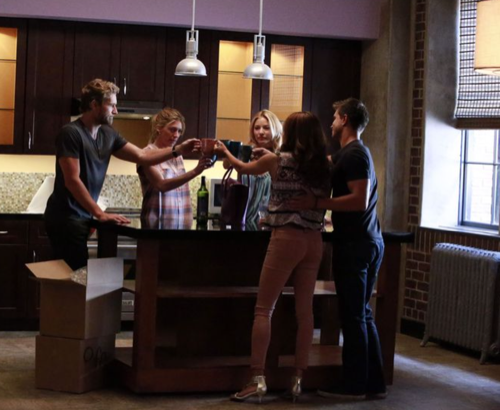 Tonight on ABC Mistresses airs with an all-new Tuesday, September 6, 2016, episode and we have your Mistresses recap below for you.  On tonight’s episode season 4 of Mistresses comes to an end and Life-changing events occur in the Season 4 finale.

Did you watch last night’s episode where April (Rochelle Aytes) was unsure how to announce her baby news to Marc (Rob Mayes) just as his career was taking off?  If you missed the episode we have a full and detailed Mistresses recap for last night, right here for you!

On tonight’s Mistresses Season 4 finale as per the ABC synopsis, “Fast-forward several months, Joss and Harry, as well as April and Marc, are happily married and are new parents. Marc takes on the role of an overly concerned, overly attentive parent, while Harry is more hands-off as he tries to navigate how to be a father. Harry’s world is turned upside down when he meets Gabe, someone from his past.”

Tonight’s episode is going to be an exciting one filled with drama that you won’t want to miss. Be sure to bookmark this spot and come back between 10PM – 11PM for our Mistresses Season 4 finale recap.  While you wait for the recap make sure to head over and check out our Mistresses spoilers, news, recaps & more!

The season finale opens with the funeral of Karen and not Lidia. Joss speaks at the funeral, hardly able to control her emotions. April comes up to the later to console her while the two cry.

April, Kate, Joss, Harry and Marc (who postponed his tour) are all packing up Karen’s things. When April goes to lift something heavy, Harry yells out for her to stop, making Marc question what is wrong with her. April tells them they need to talk. Marc is thrilled over the news that they are having a baby.

During a quiet moment during packing, Kate tells Joss she is so sorry for their loss. Kate apologizes over Scott and Joss tells her to forget about it, sharing the news that she married Harry. The gang reunite in the kitchen to toast Karen, Joss and Harry’s marriage and April and Marc’s baby on the way.

Adam shows up. Joss gives him a picture she found in Karen’s room of her and Adam. We see Adam leave with Joss not too far behind – saying goodbye to Karen as she closes the door on her empty apartment.

Time has passed, a lot of time. We see Harry in the hospital, coming out to announce that he and Joss have had a girl. April and Marc are there with their new baby Stella. Time keeps moving, with Harry and Joss talking about their restaurant opening. They are stressed that they have lost 2 waiters already.

At baby Stella’s appointment, Marc has a book of questions for the doctor. April tries to calm Marc down. Meanwhile, Harry is trying to reign in Kate who has her eyes on a potential waiter who shows up for an interview. Kate can’t seem to control herself.

April shows up to her store. Someone comes into the store looking like Karen. We only see the back of her head before she leaves. Kate sees the potential waiter out ny the side of the ocean. She asks him if he wants to go have a drink. He tells it would be weird because Kate is his aunt, he is Harry’s son!

April and Joss rock their babies while they talk about how April saw Karen. Joss sums it up to just missing her. Kate shows up, she wants to tell Joss what she knows. She freaks Joss out with her terrified face.

Harry and Gabe, his son, come face to face. Gabe is telling him that he is his son. Harry has plenty of questions for Gabe who says that Serena, a woman from Harry’s past, is his mother. Harry had an affair with Serena, who was married at the time. She stayed with her husband, had the baby and never told Harry.

Meanwhile, Marc is driving April and the baby crazy. April tells him to calm down and stop being so over the top.

Morning comes and Joss wants to know what Harry has to say about his son. Harry thinks that maybe Gabe is lying. Joss is getting irritated that all of this is happening. Harry thinks Gabe is after his money. Harry took a straw from Gabe that has plenty of DNA on it.

Kate and her friend are walking the pier. He’s giving her love advice. Gabe shows up at Harry’s restaurant. He has some stuff he wants to show Harry, who gets angry and tells him that he is not his son. Gabe leaves.

April still can’t shake that she saw Karen. Joss is telling her that it isn’t Karen until April shows her a credit card with Karen’s signature. The two start to contemplate why Karen would kill herself. Joss calls her Karen’s brother about Karen’s remains. They were supposed to be shipped there.

Harry gets the call about the DNA. His look says it all, Gabe is his son.

Marc falls asleep with Stella and her hat falls off. She gets a sunburn and Marc freaks out, calling the doctor right away while Lucy tells him to relax.

Harry is beside himself, telling Joss that Gabe is his son. Joss wants him to deal with it all. She feels alone and scared. She’s tired and she needs Harry to be better father. He is scared, he never had a proper role model. Joss shows him how to hold her. The three sit as family.

Marc also comes to terms with his craziness over Stella with the help of Lucy.

Harry tracks down Gabe, who seems hesitant to talk to him. Harry apologizes and offers him a job and a place to stay.

The restaurant opening is a success with everyone together and having a good time. Gabe shows up and wants to take Harry up on his offer, something that Joss didn’t know about.

The next day April is at the store when the doors opens. Its Karen Kim!