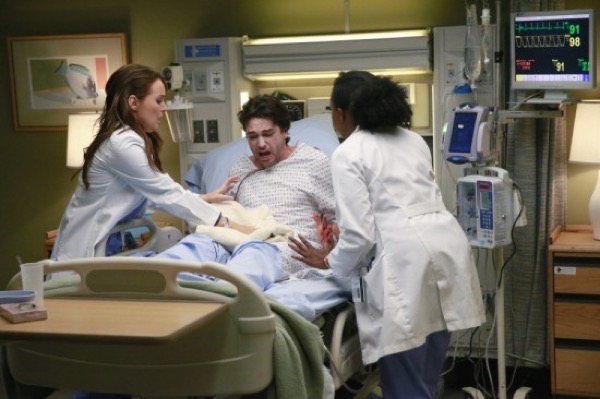 Tonight on ABC Grey’s Anatomy returns with a great all new Thursday April 9, season 11 episode 19 titled “Crazy Love,” and we have your weekly recap below. On tonight’s episode, Meredith [Ellen Pompeo] uncovers Amelia and Owen’s [Kevin McKidd] secret romance and reacts harshly to Amelia, who then contemplates this new relationship. Elsewhere, Catherine [Debbie Allen] helps a man who needs medical assistance after his wife took vengeance on him for being unfaithful to her.

On the last episode, a school field trip to the hospital took a dramatic turn when the kids witnessed two injured cops entered the emergency room. Meanwhile, Stephanie set her eyes on one of the chaperones, Callie operated on the leg of the police captain and Amelia had to face her feelings for Owen. Did you watch the last episode? If you missed it, we have a full and detailed recap right here for you.

On tonight’s episode as per the ABC synopsis, “upon realizing that Owen and Amelia have been seeing each other behind her back, Meredith comes down hard on her sister-in-law causing Amelia to rethink things. Meanwhile, Catherine springs into action when a man is brought into the hospital after his wife seeks revenge on his cheatings ways.”

This episode looks like it is going to be a great episode and you won’t want to miss it, so be sure to tune in for our live coverage of ABC’s “Grey’s Anatomy” Season 11 episode 19 at 9 PM EST!

Derek was heading back to D.C. on an early flight in order to formally quit his job with the president in person so luckily he wasn’t around when the sparks began to fly between his wife and his sister. Recently, Owen and Amelia have begun dating and while it’s nothing serious – Meredith of course had something to say. Apparently, just before she left a couple of months ago, Cristina got Meredith to promise she was going to look after Owen. And so Meredith is taking that mean his personal relationships were also included.

Hence she warned Amelia. She told her sister-in-law that if it was nothing serious then it was ok but if things did develop she essentially asked Amelia to be careful with him. And Amelia took that warning as a dig on her past.

Prior to moving to Seattle, Amelia had checkered history with both drugs and men. So it’s natural that someone would be concerned about her but when Meredith made her feel like she was toxic – that put her in a “rough” mood for the rest of the day.

Amelia almost bit off Stephanie’s head because she was so angry. And all her intern did was ask what case they were going to be on. So afterwards Stephanie thought it would be best if she started looking into other fields. Neurology is great and all but she wasn’t sure for how much longer she was going to be able to deal with Amelia. Especially if the other woman continues to snap at her.

Only there was one problem with looking around – Stephanie was kind of a protégé at everything. Meaning she was always good no matter where she landed. Though when a patient came in with a severed penis – she did wonder about Urology.

The penis needed to be reattached and frankly there was only one person they could call to get such a job done. And unfortunately for Richard, Catherine was that expert.

The former couple had a slight reprieve from all the arguing when her former grandson passed away but since supporting each other in that time of need – they’ve been back at each other’s throats. So, no, Richard didn’t want Catherine to be brought in on the case. And he tried to fight it. However, ultimately, it wasn’t his decision to make.

The patient really wanted his genitals to be reattached and he also wanted the top person in the field to do it.

Anyways, that wasn’t unreasonable. What was on the other hand was when the patient although grievously injured told his doctors that he did not in fact want to press charges against his wife Marcia. She was the one that cut off his penis and he said he was prepared to forgive her for that.

Marcia it seems had found out about his secret relationship with his sous chef at his new restaurant and so she cut off his penis and then threw it into one of the pots. So her husband, in both a bid to get his wife back and as way to avoid publicity, said he won’t be filing charges and then once his penis was reattached he then called Marcia and told her where he was. Apparently, they had a deal in which he later broke with the sous chef.

Earlier he had promised his wife that he was only going to sleep with waitresses and hostesses but by sleeping with his sous chef – Marcia felt hurt. And so she cut off his penis. Then ended up forgiving him in the hospital for breaking their deal.

Overall, theirs was a sick relationship and when the sous chef found out her boss was still going to stay with his wife – she took his penis – again. Thankfully though she returned it before she could flush it in the nearest bathroom but running back and forth over genitalia did make Stephanie realize she doesn’t want a career in urology.

Catherine had offered her job shadowing her but the idea of looking at something so gross for a living turned Stephanie right off.

Yet Catherine did finally make amends with Richard and she reattached a penis twice. So her trip wasn’t a complete waste. It seems like the only thing she and Richard needed was a chance to talk instead of throwing insults. And now they’re actually resolved in trying to make things work between them.

Funnily, enough, Maggie and her latest Ethan had to make the same decision because their first date was the worst. And that is in no way a joke. On the date, Maggie didn’t let him get a word in, then she ordered for them both, and she even paid for their dinner. So, in order for Ethan to give her a second chance, she had to promise to be herself. Just herself.

What went wrong the last time is that she was trying to be what she thought a social person was when really she’s still that shy nerdy kid underneath it all.

And you know what Amelia made a choice as well.

She let that “thing” with Meredith upset her and later when her surgery on teenage gold prodigy didn’t go as planned – she took out her frustrations on all the wrong people. Like Owen for instance. She tried to call off her relationship with him because she didn’t think she could do anything right.

But once she got over her own insecurities, she realized what she needed to do with Meredith and that was to tell her to back off.

Her life was her own and she didn’t think it was any of Meredith’s business. And, after making such a big deal, Meredith was fine with that. She kind of let it go. Yet what she could not ignore is that Derek never made it to his meeting in D.C.