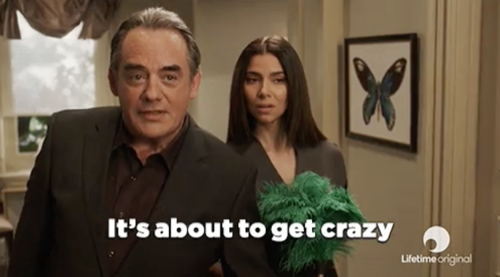 Tonight on Lifetime Devious Maids continues with an all new Monday, June 20 season 4 episode 3 called, “War and Grease,” and we’ve got your Devious Maids recap down below! On tonight’s episode Genevieve (Susan Lucci) takes her war on Marisol (Ana Ortiz) to new heights; Carmen (Roselyn Sanchez) attempts to befriend Daniela; (Sol Rodriguez) Zoila (Judy Reyes) and Frances grow closer, and Evelyn’s plan for divorce is thwarted when Adrian cuts off her funding.

On the last Devious Maids recap, Rosie found herself involved in the aftermath of a murder; Marisol made a shocking discovery about Genevieve; Carmen worried about controlling Daniela after she began acting wild. Did you watch last week’s episode?  We did and we recapped it right here for you.

On tonight’s episodes per  the Lifetime “Genevieve takes her war on Marisol to new heights; Carmen attempts to befriend Daniela; Zoila and Frances grow closer, and Evelyn’s plan for divorce is thwarted when Adrian cuts off her funding. Meanwhile, Rosie and Jesse must deal with a new visitor.”

Tonight’s episode is going to be another fun one, which you won’t want to miss. So be sure to tune in for our live coverage of Lifetime’s Devious Maids Recap Season 4 episode 3— tonight at 9PM EST! While you wait for the episode, share your comments about season 4 of Devious Maids below.

Tonight’s episode of Devious Maids kicks off with Marisol and Peter on a date. When they arrive at the restaurant, they learn that Genevieve cancelled their reservation. She sits at the restaurant and taunts Marisol. Peter and Marisol leave, and Genevieve has toilet papered her car and wrote “Whore” on it.

At the Powell House, Carmen finds Danny smoking weed. She starts to lecture her, but Danny says Carmen is being a buzz kill. She insists that the weed is medical for her glaucoma, but she has no idea what glaucoma is.

Rosie visits Spence in prison. Spence says that his friend Ben came to the prison and helped him piece together what happened the night that Peri was killed. She tries to tell Spence that he is being tricked, and he is not a murderer. Spence doesn’t want to hear it though, he is convinced that he is guilty, he asks Rosie to take care of his son Tucker.
Zoila heads over to Kyle’s house to see him. His mom tells Zoila that Kyle had to leave town on family business. But, she invites Zoila to go to a charity lunch with her.

Marisol heads to Evelyn’s hotel room, she tells her that Genevieve is sabotaging her. Marisol is upset because now Genevieve is getting all of her maids hired from their jobs that she lined up for her. There’s a knock at Evelyn’s door – she is being kicked out of the hotel, her credit card was declined, Adrian has cut her off.

Rosie heads to Spence’s house to check on Tucker, Jesse has been watching him. Rosie says that some guy named Ben convinced Spence to confess. Jesse says that Ben was definitely up to something and acting strangely the night that Peri was killed. A woman arrives at the door and interrupts them – she says that her name is Shannon and she’s Peri’s sister. Shannon announces that she is moving in to the house and taking care of Tucker and his trust fund.

Marisol meets up with Zoila and Carmen for lunch. Marisol says that Genevieve has been attacking her, Zoila laughs and says that it’s just beginning – she usually sends people boxes of bees. Zoila reveals to Marisol that the reason Genevieve is going so crazy is because Peter dumped her, one day he just left, and never even told her why.

Evelyn tries to go home, but Carmen won’t let her through the gate. Adrian tells Carmen no to let Evelyn and to say that she is unavailable. Evelyn says that Adrian is a toad and he will be hearing from her attorney.

Kyle’s mom Frances shows up at Zoila’s – she is starting to get a little suspicious. She thinks that it is strange that Zoila keeps accepting invitations to events, but she hasn’t held any social gatherings of her own. Frances is planning a party for Zoila at her house – except it’s not actually Zoila’s house.
Marisol confronts Peter about abandoning Genevieve. Peter reassures Marisol that is not what happened. Peter reveals that Genevieve cheated on him, that’s why he left her. Marisol is annoyed that Genevieve lied – she says it is time for them to “fight fire with fire.”

Daniela shows up at Powell House, she’s frantic, she cries to Carmen that she was smoking weed and driving Adrian’s Bentley and crashed it in to a tree. Carmen agrees to help her hide it, and says she will call a body shop and get it fixed – but Danny has to pay her back.

Zoila is freaking out, she needs to hire servers for the party and she doesn’t have any money. She convinces Carmen to work the party. Carmen heads to Danny’s room to tell her that she has to work too. She finds two guys in Danny’s room that she brought home from the bar – and she got a tattoo on her leg, and it’s spelled wrong.

Tucker is having a meltdown, Shannon finally caves and tells Jesse to call Rosie and have her come help them out. Rosie comes to the rescue and saves the day.
The guests begin arriving at Zoila’s party – Frances hovers over her to see how she interacts with the guests. Carmen rushes around with a tray serving the guests. Danny never showed up to help her. Carmen rushes to the kitchen to call Danny – but Danny is at the bar having a drink with Jesse and blows her off.
At the Westmore House, Rosie puts Tucker to bed. Afterwards, she has a chat with Shannon and convinces her to hire Rosie as Tucker’s nanny instead of calling the nanny service.

Genevieve shows up at Marisol’s doorstep, and she is furious. Apparently Marisol fought back, and had Genevieve’s hair stylist bleach her hair. She looks like she stuck her finger in a light socket … a yellow light socket. Marisol and Genevieve sit down and have a heart to heart. Genevieve confesses that she has just been harassing Marisol and Peter because she secretly misses Zoila.

Meanwhile at ZOila’s house all hell breaks loose, Danny finally shows up to work – but she is drunk. She trips and spills a drink on Frances’ shirt. Frances freaks out, and Carmen defends Danny. Zoila apparently forgets that Carmen in her friend and not really her employee and fires her on the spot and embarrasses her in front of everyone.

Evelyn shows up on Marisol’s door step, and crashes her and Peter’s dinner date. Evelyn announces that she is moving in – she doesn’t have anywhere else to go and she refuses to get back together with Adrian.

Back at the Powell House, Carmen storms in to Danny’s room and confronts her. She freaks out on her for the boys, drugs, and crashing cars. She lectures Danny about acting like a kid and going down a bad road. Danny shouts that it is none of Carmen’s business, she’s not her mom. After Danny storms out, Carmen calls her cousin Josefina to tell her that something is wrong with Danny.

Rosie heads to the strip club to talk to Spence’s alibi Cinnamon – but the club owner says that she’s missing and she didn’t show up to work.

Meanwhile, tonight’s episode ends with Ben with his girlfriend…Shannon, Peri’s sister. He laughs and says that “Poor little Cinnamon is going up in smoke.”