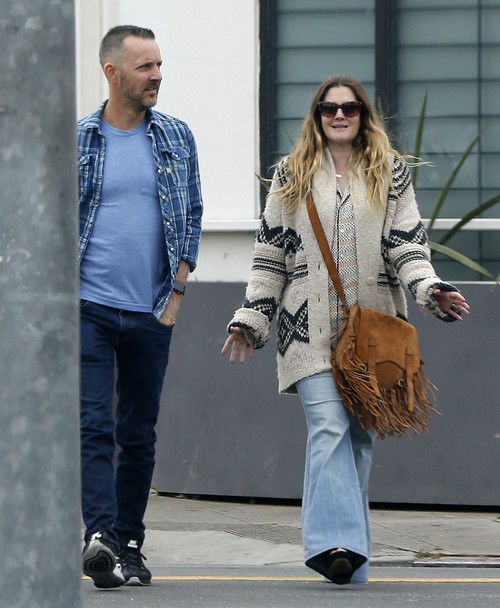 Drew Barrymore had a lunch date with Chris Miller on Saturday, April 9. The date sparked talk that Chris might be Drew’s rebound lover following her divorce from Will Kopelman.

An insider close to Drew Barrymore recently said that she was kinda “bummed out that it didn’t work out.” The source says Will Kopelman and Drew gave it their all during the almost four year marriage. Did Barrymore really give the marriage a chance? Or was Chris Miller already waiting in the wings?

The marriage to Will isn’t the first relationship Drew has quickly abandoned. Back in 1989 Drew dated fellow actor Corey Feldman for about a hot minute. After that Drew decided to skip dating entirely!

The first time Drew tied the knot was when the actress was 19-years-old. Husband number one was Welshman Jeremy Thomas, a Los Angeles bar owner. The couple was married a grand total of two months. Yes, two months.

Comedian Tom Green was Drew’s second husband. The couple lived together for a year before they got engaged. By the time Tom and Drew tied the knot the comedian and the actress had been together for two whole years. The marriage lasted five months before filing for divorce.

Drew’s longest relationship may have been with a guy she never was engaged to or married. From 2002 until 2007 Barrymore dated Fabrizio Moretti, drummer for The Strokes.

Fabrizio and Drew called it quits and she jumped right into blink-of-an-eye relationship with actor Justin in 2008. Justin and Drew got back together for a short period of time between 2009 and 2010 before ending the relationship completely.

In 2011 Drew met soon-to-be third husband Will Kopelman. Just months after meeting the couple got engaged in January 2012 and married in June the same year.

Now, just a week after announcing the separation from Will Kopelman, a new guy has come into Drew Barrymore’s life. Seems Drew has a history of jumping from one relationship to the next with barely a second between.

Is Chris Miller simply a shoulder to cry on or has Drew Barrymore already moved onto yet another doomed relationship? Or, is husband number four the charm?

Newly single actress Drew Barrymore is spotted out for lunch with Chris Miller on April 9, 2016 in Hollywood, California. FameFlynet