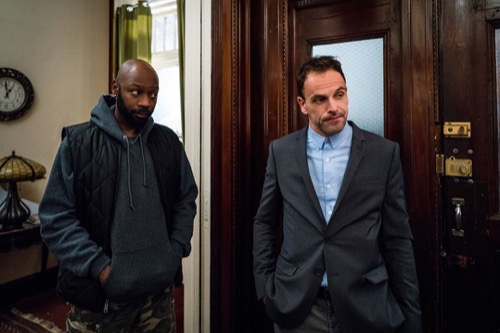 Tonight on CBS their crime comedy-drama Elementary premieres with an all-new Sunday, December 11, 2016, season 5 episode 9 called, “It Serves You Right to Suffer” and we have your Elementary recap for you below. On tonight’s Elementary Season 5 episode 9 as per the CBS synopsis, Holmes (Jonny Lee Miller) and Watson (Lucy Liu) have just three days to find the real murderer before he is arrested and sent back to jail.

Did you watch the last episode of Elementary where Sherlock (Jonny Lee Miller) and Joan (Lucy Liu) discovered a man’s death caused by ingesting poisoned sausage was connected to a lab working on a breakthrough in the artificial meat industry?  If you missed it and want to get caught up before tonight’s episode we have a full and detailed Elementary recap, right here.

On tonight’s Elementary season 5 episode 9 as per the CBS synopsis, “When Shinwell comes to Holmes and Watson for help after he’s framed for a gang killing, they have three days to find the real murderer before he is arrested and sent back to jail.  The episode was directed by series star Aidan Quinn, in his television directorial debut.”

#Elementary starts with Joan missing a call from Sherlock. A scream wakes her. She goes downstairs armed for a fight as the screaming continues. It’s a phone. She answers it. It’s Sherlock who’s upset she didn’t answer her phone.

He tells her to meet him at a murder scene. She goes. It’s not Marcus’ case, he heard it on the scanner. He says the cops saw two men that fled and one tossed a gun. Joan asks why are we here for a gang murder.

Sherlock says one of the men sounded like Shinwell and found a necklace that looks like his. The victim was Ricky Morales and it looked like an execution. The lady cop says it’s SBK territory. Sherlock says the ammo doesn’t match the gun thrown down.

Sherlock points out that the bullets are antiques and the gun used to fire it is an Asian weapon more than 100 years old. Joan says it’s odd that the two men who ran off waited an hour before they left. Sherlock says all of this is strange.

The lady cop asks why major cases cares and Sherlock says it’s a slow week. Sherlock says Shinwell is on parole and asks if she thinks he did it. She says SBK was his old gang and he threatened her last time she saw him.

Joan says it wasn’t real, he just wanted her gone. Joan says she doesn’t think Shinwell did it. Joan texted him but hasn’t heard back. Sherlock says they need to go see him. They head to his place and knock. Sherlock picks the lock.

They find his cell phone there and wonder if he left or forgot it. There are signs he left in a hurry and Joan says his toolbox is gone. Sherlock goes to talk to some SBK guys about a clown crime he made up. Sherlock asks them if they know the gun and Tall Boy threatens to curb stomp him.

Joan calls Sherlock and confirms that Shinwell pawned some stuff and is likely on the run. She finds him on their doorstep and Shinwell says he needs her help. Sherlock comes home and sees Shinwell in their home. Joan says he was at the murder scene.

Shinwell says he didn’t kill him and Sherlock agrees. He says he’s back in SBK because he’s an FBI informant now. He says a few days after he got out of prison, Agent Whitlock contacted him and says he knew he was distancing himself from SBK.

He says he decided to help the FBI take SBK down. He says he told Joan to stay away so she wouldn’t get caught up. He says a kid heard shots and found the body and called his brother who’s SBK. He says they showed up to move the body and then the cops came.

Sherlock says he’ll be arrested for the gun on a parole violation. Shinwell says he needs Agent Whitlock to help him with this. Joan goes to see Whitlock. He asks how certain she is that the prints will be on the gun. She says pretty solid. Whitlock says he can’t help.

Joan gives an angry Shinwell the bad news. He says he was trying to do right. Shinwell asks them what to do. Sherlock says he’ll be a suspect in the homicide and Joan says they just need to find out who killed Morales.

They decides it’s someone from Ricky’s gang who killed him trying to blame SBK or start a war. Shinwell and Sherlock break into a car outside Ricky’s apartment and sit watching. Shinwell doesn’t like doing crime.

Sherlock asks why he worked as an informant on SBK. He says the DA offered him a deal back in the day and he turned it down and did his time. He says SBK is like family and says some guys he brought into the game were incarcerated too and says SBK didn’t care.

Shinwell says SBK saw them as disposable like the FBI. They see the girlfriend leave and Sherlock and Shinwell break in to look for clues on who may have betrayed him. Sherlock finds some medication and Shinwell shows him a calendar with a doctor’s appointment.

They wonder if he was in therapy. Detective Cosa shows to the 11th to see Joan and says she talked to her captain and asked him to fast-track the fingerprints and says she’ll have them tomorrow. Joan calls Sherlock.

They go see a therapist that Ricky was seeing. The doctor doesn’t want to talk to them. Sherlock says a gang member might come for her if they find out he was in therapy. She caves and talks to them. She saw Ricky for six months for panic attacks.

The doc says Ricky got caught with a kilo of heroine and he became an informant to avoid jail. The doc says he felt guilty for betraying his gang and says Whitlock recruited him. Sherlock says they know the guy.

They wonder if it was Whitlock or the gang. Joan says they torture traitors before they kill them and he did quick, painless and not in the territory. Joan says there was a robbery and Ricky’s gang just got hit hard. Joan says they’re licking their wounds.

Shinwell says SBK has no reason to think he flipped. Joan says Whitlock might have told SBK he’s an informant to kill him. Shinwell says he has to protect his daughter and walks out. Shinwell goes to meet Tall Boy who says he was looking for him.

Shinwell calls Joan and says Whitlock killed Ricky and he knows why he did it in SBK territory. Joan goes to see Whitlock and confronts him and says he’s using his CIs to rob the gangs. Whitlock takes her to his office. He says she’s doing drugs.

Joan says Shinwell told her that he pressed him hard on SBK money drops. Joan says he shot Ricky to change the money drop for SBK so he could rob them. Joan says four gangs have been robbed by the same group of men.

Whitlock denies it and she says they found a survivor who told them one of the gang took a bullet in the arm. She shows him a folder of a guy who was treated for an arm wound. Joan says his DNA will be a match of the robbery and he’s a former agent who worked with Whitlock.

Joan says the guy is with the cops now and he could turn on him easily. Whitlock asks what’s the out. She says the out is for him to tell Cosa about Shinwell. Joan says explain the gun away and they’ll keep him out of gen pop when he goes to prison.

Whitlock tells her to go to hell. She drops her card and leaves. Whitlock is worried. Joan gets a call from Whitlock who claims he’s a good agent. He says 99 of what he does is clean. He says it started small taking a little bit from criminals then he got in deeper.

Whitlock says he’s been waiting for this to crash down. He says he’ll do her a favor of not talking to the cops. He says Shinwell is a banger for life and he’ll be better off when he goes back to prison. He says she can have the gun that killed Ricky if she comes by his office. She hears a shot. He shot himself.

Joan gives Shinwell the bad news. Sherlock wonders if Whitlock’s partner Lionel might help but Cosa says the guy lawyered up. They wonder about the third in Whitlock’s gang. Shinwell says it’s over and Joan says the bullets will be a match for the gun Whitlock used.

Shinwell says he’s got a day before he goes back to prison and is going to make the most of it. He takes off. Sherlock is at Marcus’ death looking through case files. Marcus jokes that they worried if they could keep the cop shop going while Sherlock was gone for two days.

Sherlock asks Marcus about his ex-con brother Andre. He asks what would happen if he went back to prison because of a mistake. He asks if he’d revert back and Marcus says yes. Sherlock finds Shinwell fixing a leak in a roof of an old woman that leaves in his building.

Shinwell says the man at the pawn shop didn’t charge him for the tools. Sherlock says he confirmed with the lab and his prints are on the 38. Sherlock hands him the cloth he used to wipe the gun and says the gun wasn’t tested yet.

Sherlock says please make the most of your second second chance. Shinwell is grateful.